The idea was born a little by chance. Speaking with Luca from Sapotour we said to ourselves: "Why not organize something together?" And so in no time at all we found ourselves in Tarifa with a nice group of kiters and a van overloaded with kitesurfing gear to try. A simple formula: group kitet in the European capital of kitesurfing with material tests.

The logistics of an event of this kind is not simple, because the organization of the trip is added to that of the Material Test, but in the end everything worked well, also thanks to the now tested Sapotour formula that allowed us to get comfortably to Tarifa by plane while Luke crossed half of Europe with the van to bring all our materials to Tarifa. The most difficult thing was probably the choice of the equipment to carry, because the space on the van was obviously limited, and we had to leave something to try at home in the next releases. 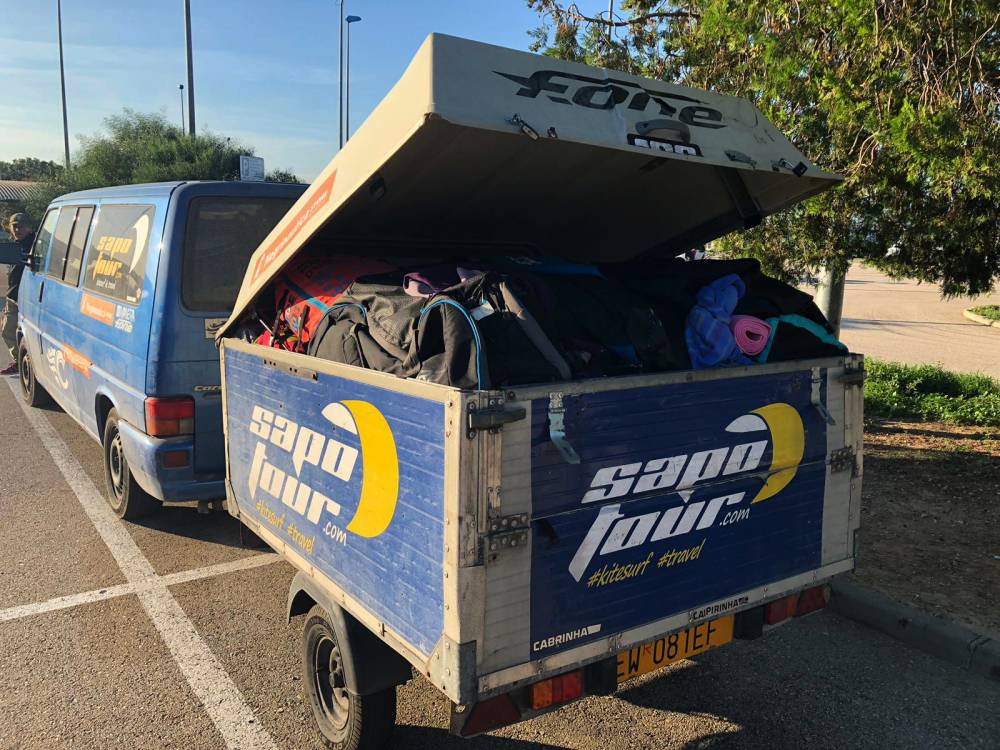 On the morning of September 18th, we then headed to Pisa airport to take our flight to Seville. Meanwhile most of the group was already flying from Genoa to Malaga and a third group from Milan to Malaga. In all, around 15 kiters plus a few guides and four children. For the first time we happened to travel with hand luggage only. No boards and equipment to be loaded, no magic tricks to avoid exceeding the luggage weight limit. We showed up at embarkation like any tourist, only with our tiny carry-on bags, while all our equipment was traveling in the van driven by Luca.

We had already been to Tarifa a couple of times, the last one in 2007, so you can imagine our excitement finding us there again 12 years later. Actually I didn't have a very precise memory except for kitesurfing spots. Yes I remembered the wind turbines but I did not remember the wild beauty of this town in the southern part of Andalucia. Arriving from Seville it is all a succession of hills dominated by hundreds of modern windmills, confirming that we are in the land of the wind, with cows, bulls and grazing horses. 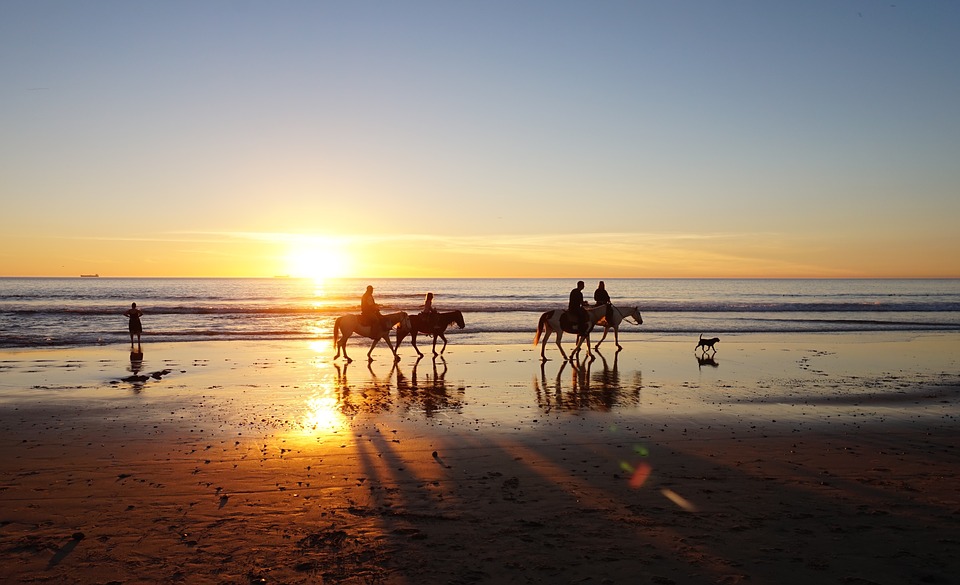 The charm of Tarifa is also given by its being the last bastion of Europe, so close to the coasts of Morocco that on clear days it seems to be able to touch Africa just 14 kilometers away. The historic center is made up of a few whitewashed houses, a few cobbled streets and the imposing Moorish castle from 960 with crenellated walls.

Over ten years ago, Tarifa was already considered the European kitesurfing mecca and the passion for this sport was palpable in the shops of the country as well as on the beach, but today all this is incredibly amplified. The city has grown and grown mainly around this sport. In Tarifa street advertising posters are not those of cars or supermarket offers. Here the 6x3s are occupied by posters of kitesurfing equipment. There is an entire neighborhood, recently built, where most of the activities are kiteshops, schools and single-brand stores of North kiteboarding, Brunotti, Duotone and many other top Kitesurf brands. Hard not to get caught up in shopping. compulsive!

In addition to all this Tarifa is also, indeed for many above all, fun, little clubs, nightlife. It is no coincidence that it is the favorite destination for those looking for a vacation not only of kitesurfing. 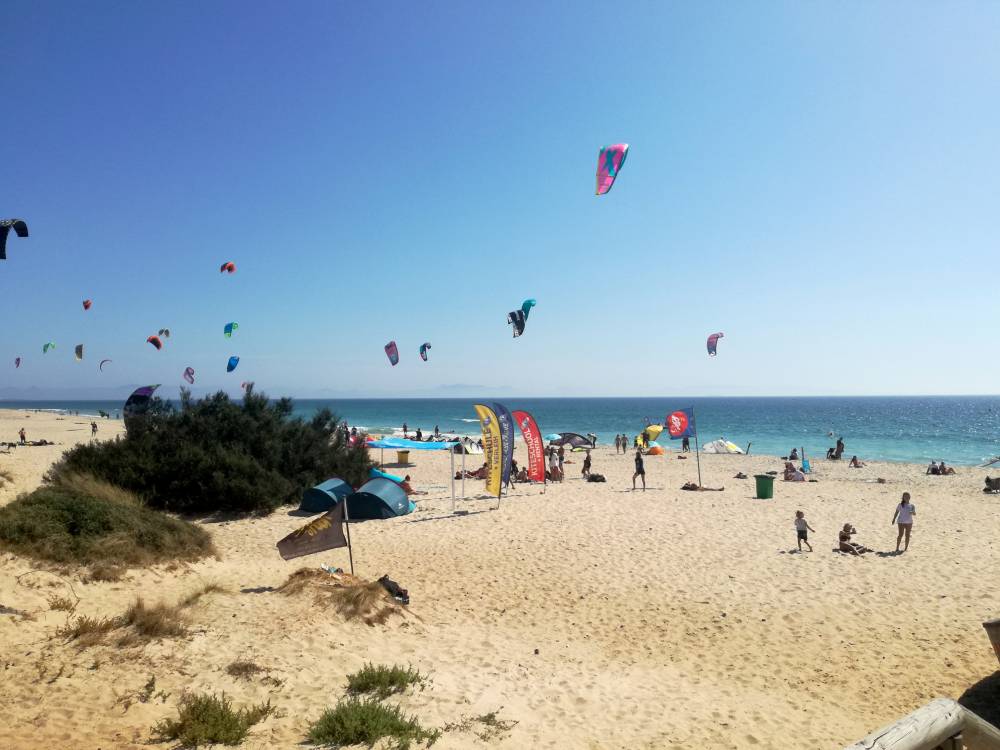 In summer the beaches of Tarifa are super crowded and the kite areas are strictly regulated, but after September 15th it is possible to go out almost everywhere and the confusion is no longer a problem. During our week of vacation we went out in various spots but mainly to the beach of Los Lances , in front of the Chiringuito Waves and to Valdevaqueros that remains my favorite beach in Tarifa. Of Valdevaqueros I especially like the landscape that can be enjoyed from the sea with large sand dunes on one side and the coast that winds up to the town ... a bad downwind of almost 10 km!
Certainly Valdevaqueros beach is also the most crowded and even at the end of September it is better to avoid weekends.

In addition to the usual beaches of Tarifa, we went one day to explore new spots towards Cadiz, ending up in Sancti Petri, where we discovered an isolated sand island surrounded by a reef and immersed in a shallow and shallow lagoon of water, which we reached with a small boat trip. A secluded spot, just for us, far from the crowding of Tarifa. A nice trip ended with a meal of fish at the local Fishermen's Association.

As for the conditions I have to say that we were not particularly fortunate, but we managed to get out almost always. No strong east, but light west that strengthened a bit especially in the afternoon so much so that the sails we used most were 10 and even 12. Not that there was no wind: we still managed to try all the materials we had with us, including the 8sqm sails, only the light wind sessions were more. Of the Material Tests we will talk separately, for the moment I anticipate only that we had with us various kites Duotone, F-one, Naish, Core kiteboarding and boards both directional and twintip all 2020.
In practice, each session was all about exchanging materials, trying settings, comparing impressions and opinions. In short, we all looked like children on Christmas day, surrounded by our favorite toys! 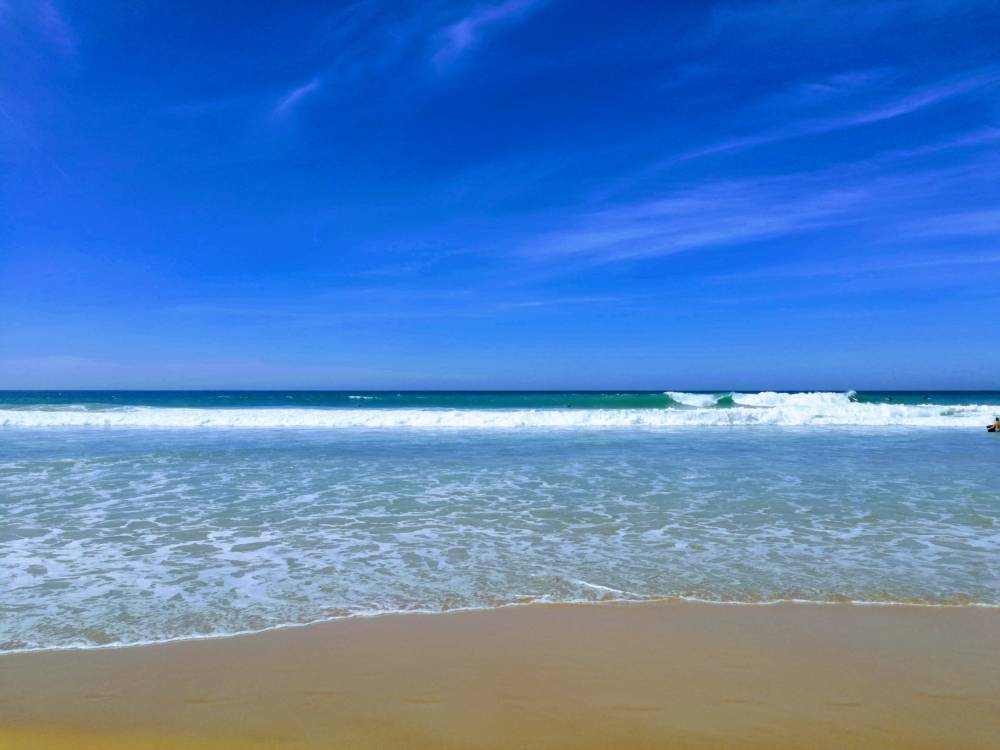 Beyond all expectations, even in this vacation in the land of wind and flat water there is a Surf chapter. Yes, because we discovered that in the vicinity of Tarifa you surf ... and how! Yes, we're talking about wave surfing, not kitesurfing with the directional one. In fact during our stay in Tarifa we found waves so beautiful and perfect to give us memorable surfing outings!

In kitesurfing spots the sea was still flat or with chop, as are the usual conditions of Tarifa. But moving to Cadiz to El Palmar and Canos de Mecawe found exceptional conditions for wave surfing. Honestly we did not expect waves of this quality and size, and in fact we did not have our surfboards with us except for a surfboard that we also use for our son's kitesurf and softboard ... but we did them well!
El Palmar is a long beach where the waves break on sand banks forming long right and left. The road that runs along the beach is a succession of surf schools. With a period of over 10 and a forecast of about 1 meter, the result was what you see in the photos. In Canos de Meca, a little further south, the waves break on mixed rock and sand. The two spots are both exposed to swells from the southwest, but Canos is a little less consistent due to the shape of the bay.

The great thing about traveling in a group is that you don't always have more fun. The group with which we shared this kite trip was varied, but there was immediately a feeling among everyone. Most were obviously kiters from beginners who approached the sport for the first time these days to experts of all levels. Some traveled alone, others like us in the family, someone with children in tow and this was a great added value for me.
Traveling with a group where there are other children means fun for everyone. The children play with each other, the adults play in turn at sea. In moments without wind we organized surf tests for children and when the wind allowed kitesurfing lessons for older children. As far as I'm concerned, every trip should be like this! 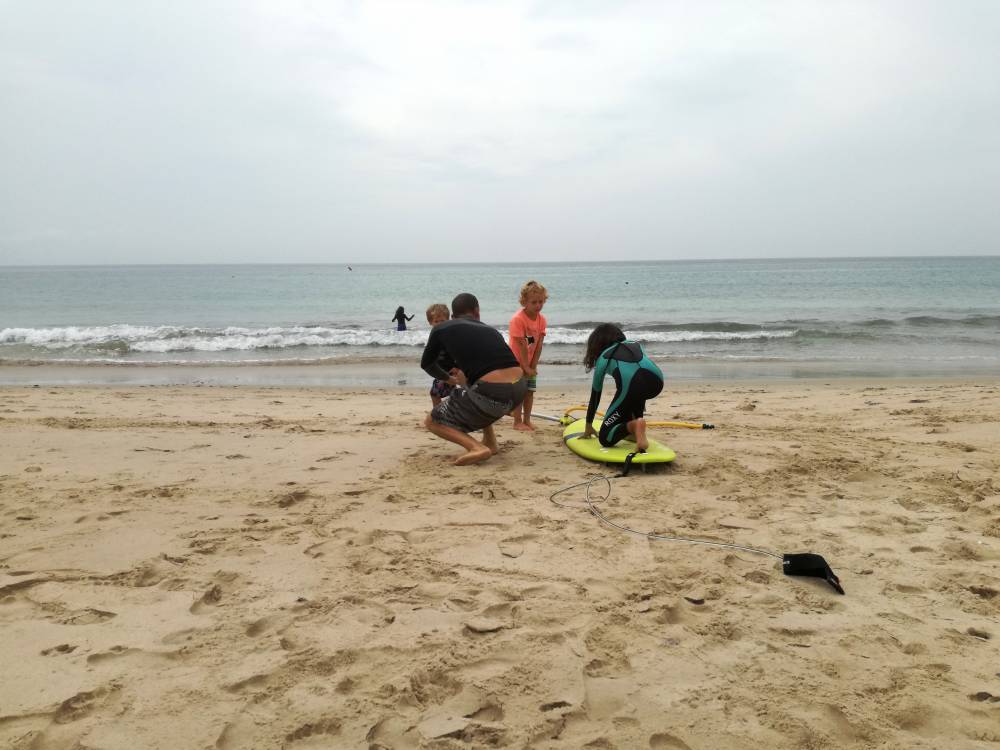 Tarifa: how to get there, where to sleep and advice.

We organize all year round kitetrips in Tarifa and traveling in groups in our opinion is much more fun, as well as having various other advantages such as assistance at sea, transport of equipment, etc.

However, if your dates do not coincide with ours or you prefer to travel alone, no problem: contact us for tips and we will give you all the info!

Getting to Tarifa is very simple: you can fly both to Seville and Malaga from different Italian cities with low-cost flights from various companies starting from a few dozen euros. Once there, rent a car and in 2 hours you are in Tarifa.

In Tarifa, there is plenty of choice for sleeping ... If you want to go out in the evening, you can choose an accommodation closer to the center.

If you go by yourself on the spot we advise you to contact Daniele of KTS for any requirement from the rental of equipment to the tips on the best spot based on conditions. 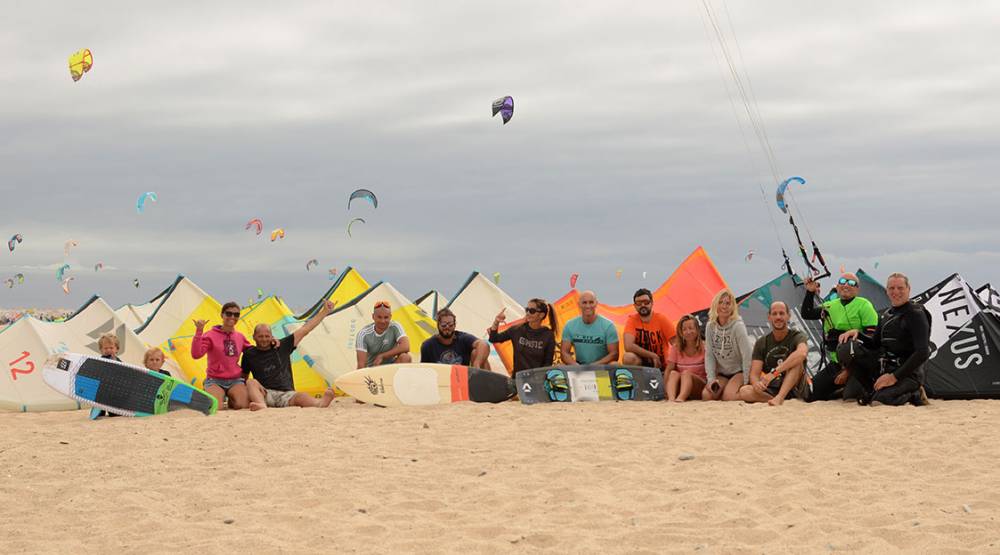 This trip was made possible thanks to the availability and collaboration of Duotone @soulridershop, F-one, Naish, Core kiteboarding that have put at our disposal the new 2020 materials to try and read the tests in the coming days and in particular: Duotone Rebel, Neo, Dice, Twintip Select all 2020 and Pro Whip 2019, Fone Bandit S 2020, Naish Triad 2020, Core Nexus 2020.

A heartfelt thanks also to all the participants, kiters and not, but above all to Luca of Sapotour for the impeccable organization, for giving us the opportunity to travel comfortably and lightly by grinding miles and miles for ourselves and for the company.

Did you feel like leaving? Contact us or take a look at Expedia to find a flight, hotel or apartment and rental car. You can also take advantage of our promotional codes:
10% discount on a minimum purchase of € 15 per hotel reservation: Code AFFITGENHOT0719

Kite: Duotone Neo 2020 Size: 10  square meters Test conditions:  several days with light winds (from 14 to about 18 knots) during our kite trip in Tarifa plus some days of strong wind (20 - 25 knots) Duotone Neo 2020 features The Neo is the Waveriding kite par excellence, chosen

The allround test for 99% of kiters

Kite: Naish Triad 2020 Size: 8sqm Test conditions:  several days with light winds (from 14 to about 18 knots) during our kite trip in Tarifa plus some days of strong wind (20 - 25 knots) Naish Triad 2020 features The Triad appeared for the first time last year on the market is the link

Kite:  Core Nexus 2019 Size: 8 mq Test conditions:  several days with light winds (from 14 to about 18 knots) during our kite trip in Tarifa plus some days of strong wind (20 - 25 knots) Core Nexus features The Nexus is the kite allround of Core designed to offer a single wing to those