Surf trip in Portugal in July 2019

Once back from our surf trip in Portugal here is the story of the holiday and above all some useful information to help that is going to start organizing itself better. This was our third time in Portugal, and like the other times we chose July for our surf trip. Why go to Portugal in July? Portugal is a great destination for wave lovers like us, even in July, because it offers the possibility to do both surf and kitesurf wave.
In fact, there are not many destinations in Europe or at least not too far away where to go in the summer to do both surfing and kitesurfing ... already finding waves in the summer is not easy, then finding spots close together that allow on the one hand to do kitesurf wave and therefore with wind and from the other to surf, so without wind, it is really a challenge! In Portugal this is possible, especially if, like us, you are willing to move a bit between the various spots.

In fact, we chose to do 3 stages, the first dedicated to kitesurfing and the following two to surfing, for a total of about 20 days. Also this time we chose to come by plane, fly over Lisbon and take a rental car to move freely. Sooner or later we will organize ourselves with a van to do an on the road from Italy through the spots of France, Spain and Portugal ... but it will be for next time!

We arrived in Lisbon where we took the rental car to head towards Fonte da Telha, south of Costa Caparica. We had already been here other times and so we knew the immense beach well, but when you arrive from the narrow road that goes down to the sea you cannot help but be speechless in front of the immense beach that literally winds as far as the eye can see. lower.
As usual, Stefano and his family were waiting for us, plus we found Zack, who, having returned from a long drive in the surf and kitesurfing spot of half of Europe, had stopped here a few days to rest and kite before leaving for Italy. 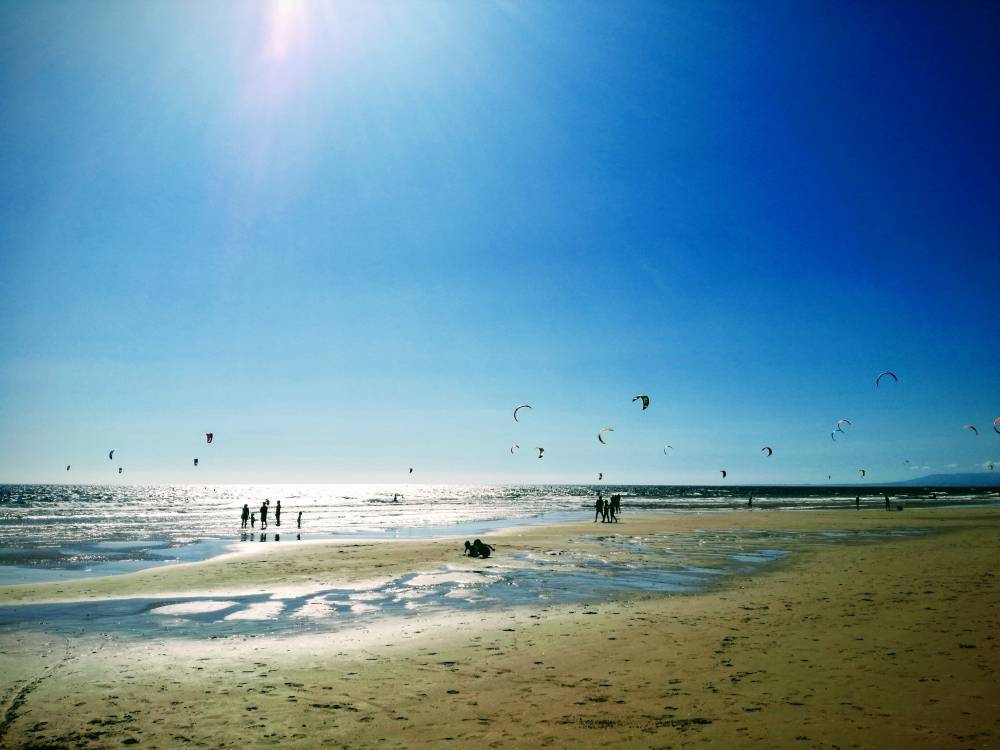 During our days in Fonte da Telha we kitesurfed every day. The wind rose after lunch, reinforcing the afternoon: 16-18 rather constant knots until sunset. The sea in front of the beach degrades rather gently creating conditions of flat water or chop with a couple of points where it is possible to have fun with small wind-formed waves. An ideal gym for freestyle, freeride and hydrofoil.
Along the beach there are 2 or 3 kitesurf areas. The most frequented and accessible from Fonte da Telha is that of the Wind Spirit school. Further north along the beach there are others, but I think it comes from other roads or from Costa Caparica.

After a few days we moved to Peniche, or rather to Baleal , to surf. Here too it was not our first time and, like a couple of years ago, we had chosen an apartment right above the Lagide spot . A spartan and rather small house but with an incomparable position. Watching the peak while dining or drinking an aperitif is just perfection for me.

Compared to the last time we found the first days but also more windy conditions a little more demanding. Unfortunately, it was not enough wind to do kitesurfing, just annoying enough for surfing ... Fortunately, there were also days full of glassy. 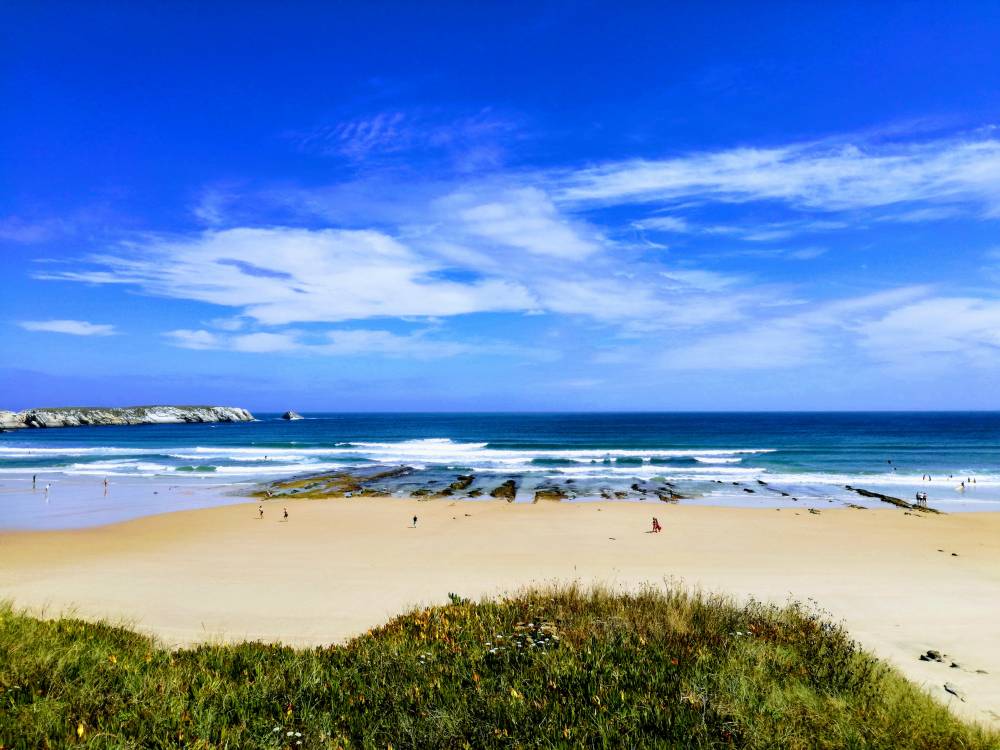 We almost always went out to Lagide, except for a couple of outings to Prainha, Bahia and one day to Supertubos (which was very small). The spots were always very crowded. In Lagide our advantage was that having the panoramic terrace we could always choose the best time to go on the water!

In one week we surfed every day: one session in the morning and one in the afternoon, so I would say that to be July was not bad at all.

Last week we finally moved to Ericeira. It was the first time here and we were really curious to visit this  Reserva Mundial de Surf . In fact, Ericea was declared a World Surfing Reserve in 2011 thanks to the concentration of quality waves found in this area. Just to get an idea of ??In Ericeira, in about 4 km you meet world class waves ranging from beachbreak to powerful reef breaks among which the most famous are Ribeira d'Ilhas and Coxos.
Obviously this does not mean that the conditions are at the top 365 days a year. Notably the best times are spring and autumn. In summer the waves are generally smaller and flies, however with the right board it is practically impossible not to find at least a good wave to take a bath. 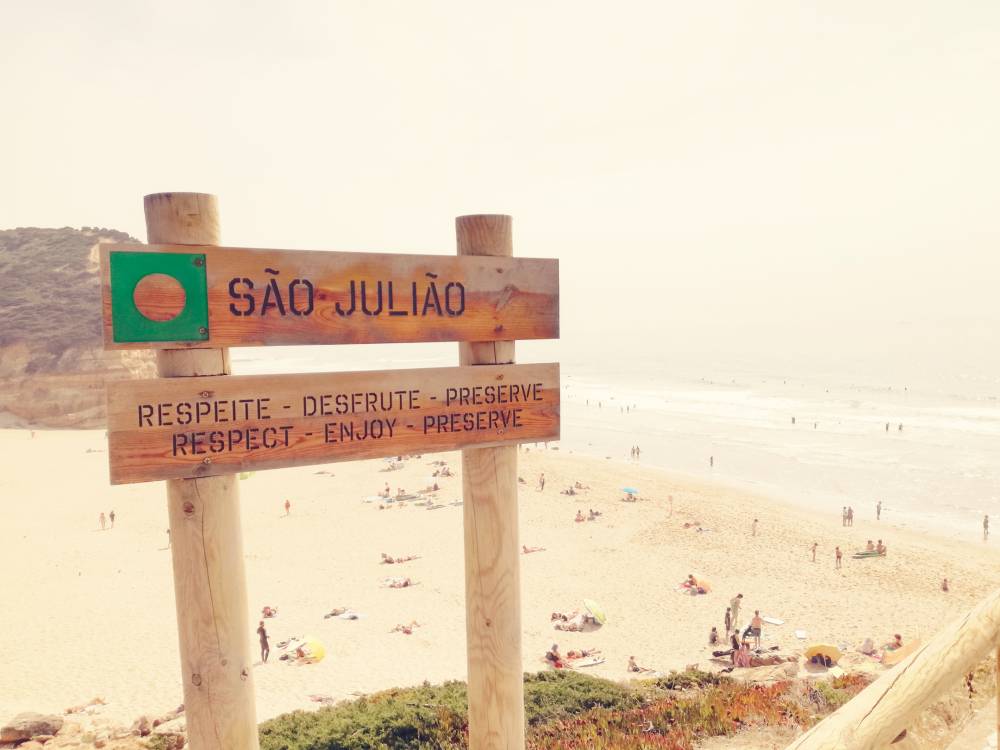 The first thing that strikes you when you arrive at a beach in Ericeira is the signage of the difficulty of the spot , a bit like the ski slopes. Green is easy, blue is intermediate and red is advanced. But beware that green does not always mean easy waves, slow or small, but rather that the seabed is sandy and not rocky ... the actual accessibility of the spot to a beginner must then be evaluated based on the conditions of the day!

The second thing that strikes you is, alas, crowding . Moreover, all this notoriety has a downside. Although there are several commercials and each has often more than one peak, at certain times the line ups are literally impractical. Easy waves are literally teeming with beginners and surf schools, while the most challenging peaks are overflowing with local, and this applies to every moment of the day. So the only thing to do is arm yourself with patience and try to earn your own waves ... which is not always easy, unfortunately.

The conditions we found were not the best. Many days with lots of wind and consequently a messy wave. Nevertheless we were able to surf every day and explore most of the spots in the area.

A constant concern of those who organize a surf trip in Portugal is always the temperature. What change to take to Portugal in the summer? During our vacation we found very different and variable conditions. The first days at Fonte da Telha, despite the wind, the temperatures were warm and pleasant. Even the water wasn't too cold. With a 3/2 it was fine and even we even made some dives without wetsuits!
The situation we found the first few days we arrived in Peniche was very different. Cloudy, cold, freezing water. For the first few days we used the 4/3 and we almost almost regret boots and hood !!! Fortunately, the sun has immediately returned to shine and the temperatures have risen rapidly, even those of the sea. For the rest of the holiday we have always come out with 3/2.
Obviously the suit to use is a subjective factor, and it also changes a lot based on the quality and wear of the suit. Our 3/2s were new and good ...