Our test with advice and guide to choosing the right skate

We've been shooting with our surfskates Yow, Carver and Triton for some time now and it's time to make a comparison between these systems, hoping to help those who are about to buy their surfskate.

The Pipe is a surfskate of Yow's Power Surfing series. Beautiful to see with its graphics that do not go unnoticed.
The length of the table is 32 inches, the longest among those tested. Compared to the others it allows a more relaxed step and of course it is perfect also for those who are taller, but not only.
Of all the systems we used, Yow's S5 is the most mobile . Just push lightly with tips and heels to tilt the board.
For those who have never tried a surfskate the feeling at the beginning is of instability because the table underfoot tilts at the slightest pressure, but it takes little to get the hang of it.
YOW mounts a tilting truck where rebounding is guaranteed by a spring. In practice, the more you push, the more you react. And that's exactly how it is.
Yow's surfskate also starts from a standstill. You can start pumping to generate speed. The more you push the faster it accelerates.
To cover long distances this is perhaps the system that tires the least, because even with minimal pressure it is possible to move forward and by pushing more it will accelerate reaching also considerable speeds.
Always talking about speed though be careful if it increases too much. Downhill for example such a mobile system is difficult to control.

If we talk about carvate, top turn, bottom turn and road surfing the Yow system is perhaps the most fluid and easiest. It takes very little to get confidence and you can very quickly be super radical.

YOW's truck is the heaviest of those we've tried. However, this is absolutely not a problem as long as you remain with the wheels on the ground. Weight becomes important only when you are doing aerial maneuvers. In case of maneuvers, landing on such a mobile system is no joke. So if the park is your second home Yow is not for you. 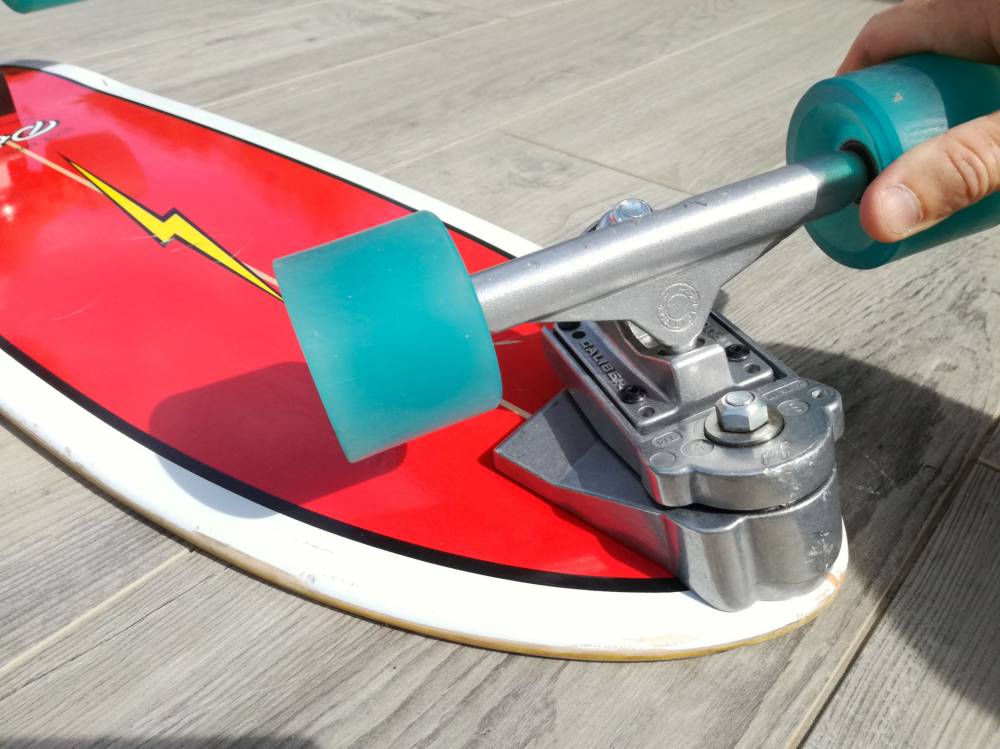 We wanted to try the differences between Truck CX and C7 without letting ourselves be influenced by any other variable like table length or wheels. So we used the same skate for the comparison, assembled with the same components. Changing only the truck. Here are our considerations. 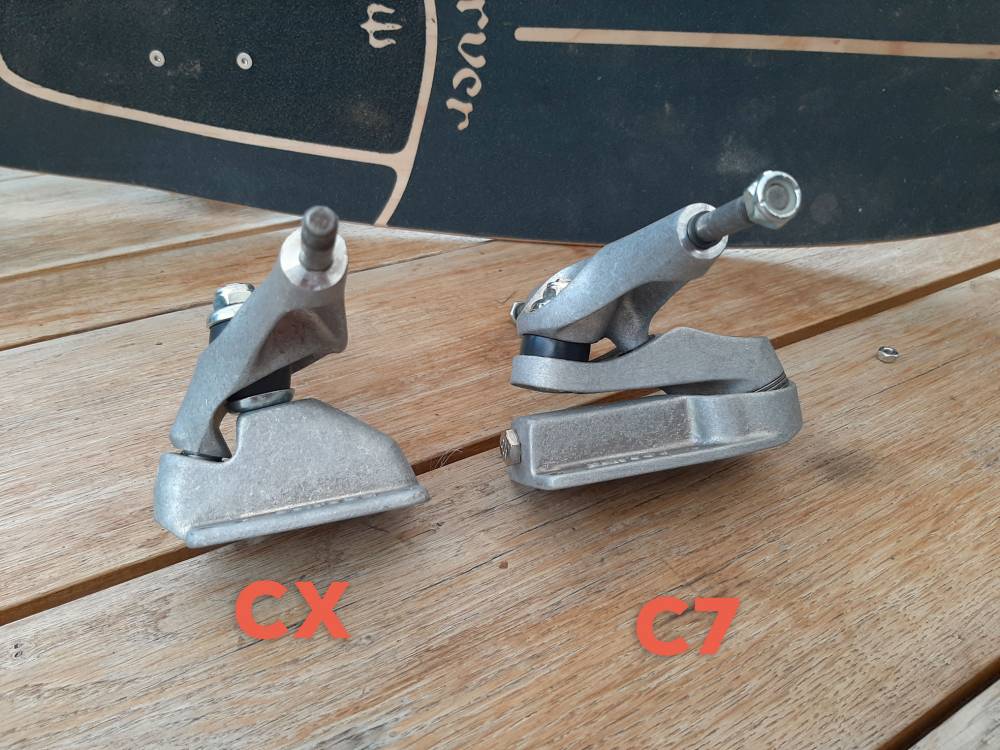 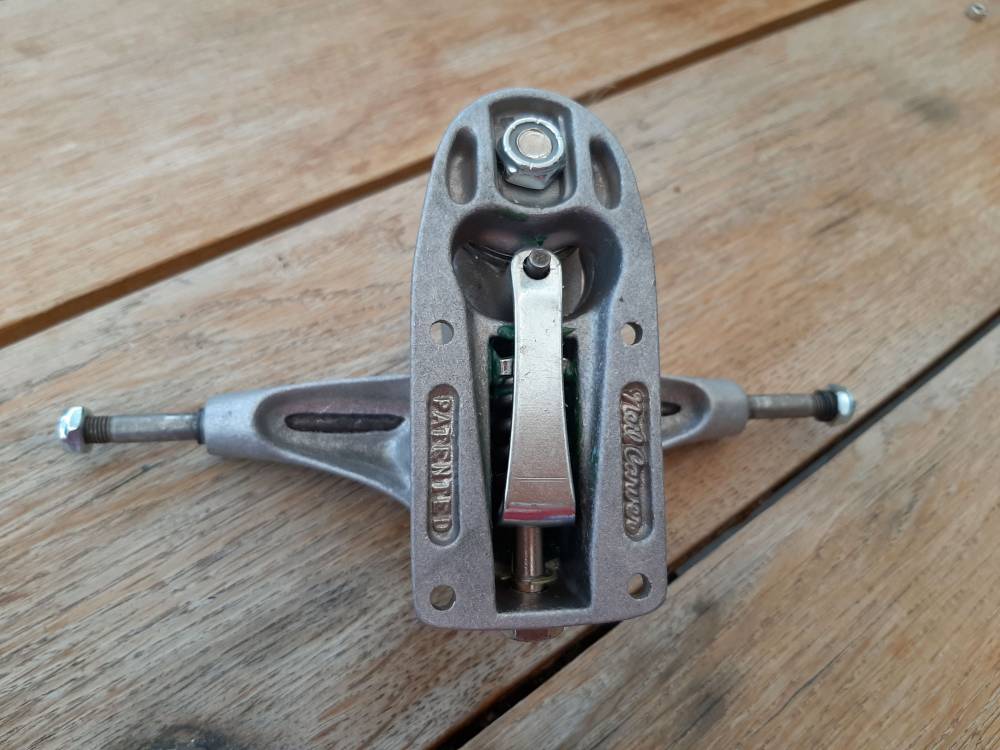 The C7 Truck is considered the surfskate truck par excellence, the top of the top when it comes to bringing back surfing sensations on the road.
As a concept it is quite similar to the YOW truck: a tilting system with rebounding guaranteed by the spring. However, there are some differences in the system, differences that then translate into a somewhat different behavior than skate.

Once on the skateboard, the feeling is quite reminiscent of YOW, but with much less mobility. The Carver C7 is a bit stiffer than the Yow and also a little less agile and less fluid, but more stable. Even the rebound seemed inferior.
So pumping requires a little more strength and even carvate, top and bottom need a little more pressure to get the same result.
The C7 is a bit lighter than the YOW system. 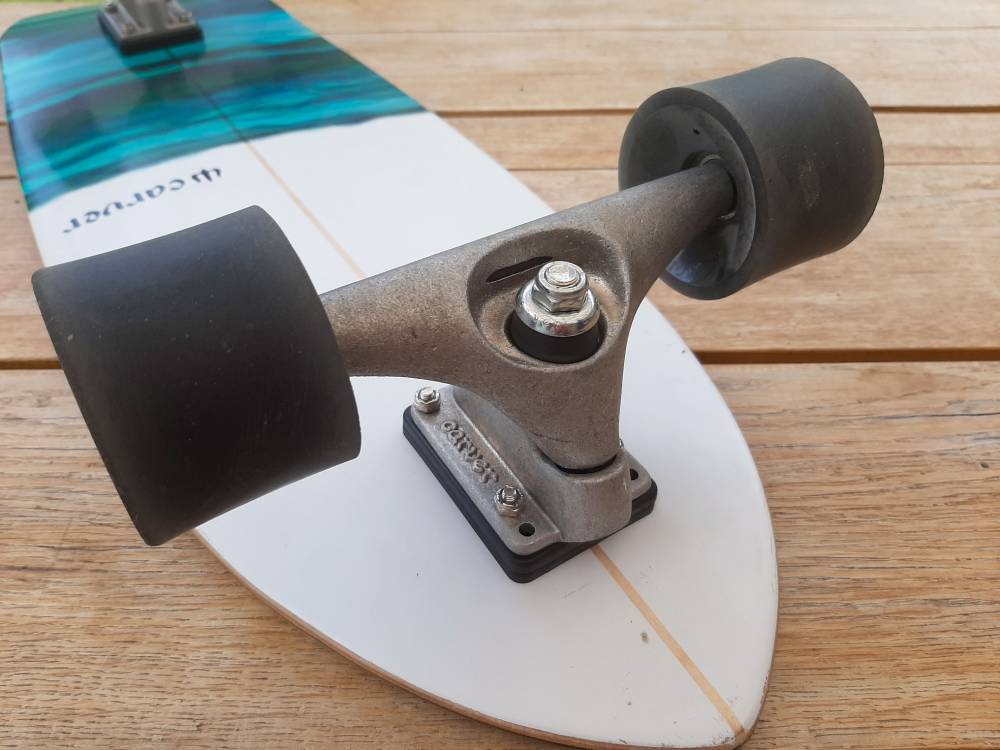 The Truck CX is probably the most versatile system. As a truck, the mechanism is completely different from the previous two: no spring.

Once on the skateboard, the feeling is very different from both Yow and C7. The table under your feet feels more stable. You need a fair amount of pressure to tilt it. Pumping is therefore a bit more tiring because it requires more thrust, but it can be accelerated even more.
We did some testing on a flat course: the Cx carver was the fastest among these, but also by far the most tiring.

If we talk about carvate, top turn, bottom turn and road surfing the CX system is considered by many to be the furthest from surfing. We do not agree. Indeed we have found that it requires a more precise movement and very close to what is done on a surfboard, in particular as regards the pumping.

The pumping in the surf is done to accelerate, especially on the sections that are more like the waves. To accelerate on a surfboard it is not enough to push alternately on the tip and the trunks. A coordinated compression and thrust movement is required to generate acceleration. The same movement that serves to make our surfskate move with CX trucks.
And the Yow then does not move like this? Yes, of course it does, like the C7. Except that with these systems it is possible to advance and accelerate even if the movement is not technically perfect ... so, especially for beginners, they advance with that movement that is more reminiscent of the hula hoop than the surf! And since the skate travels anyway, it is not easy to realize the error and correct the technique.

Triton is, as we know, a surfskate line always produced by Carver but a little lower cost to cope with the fierce competition. The Tritons are produced in China and not in the USA like the Carvers and they have a truck that is almost identical to the CX. I say almost because in reality if we compare them there are differences, albeit minimal. In particular, placing the two systems side by side we see that the Triton CX has a slightly narrower wheelbase (distance between the wheels). We are talking about 2 cm scarce. The wheels in our case were the Mag 70s which are also found on many Carvers. The grip should have lower density ... but nothing that catches your eye. We come to the test.

We tried the Blue Horizon first, so it was exactly the same as our Carver Resin.

As soon as we got on the Triton we found it a little softer and more mobile than the CX and more lively. As for the thrust he manages to give with pumping we found it really very similar to that of CX in all respects. Honestly, it's a feeling that we really enjoyed. We would say a fair compromise for those who want a CX-type system to have a more stable skate, also suitable for some downhill and park, but would still like to surfskate and therefore look for a fairly soft truck.

We then tried the Xenon 29 . The shorter board makes the skate even more lively and radical, really super fun and responsive.

We liked Mag wheels much more than concave wheels that have too much grip. 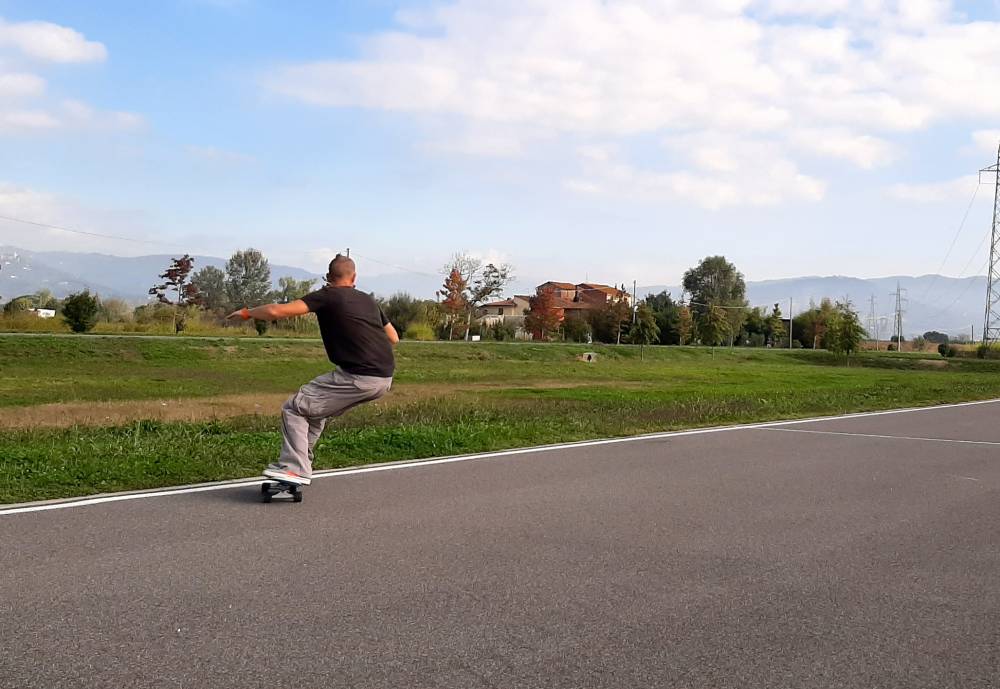 Which surfskate to choose?

It is not easy to recommend a surfskate over another. Everything depends on who will use it and how. Each has its pros and cons and the choice is very personal in our opinion.
As a general rule we can recommend Triton or Yow to light and children and young people because the truck is softer and reacts well even with less pressure, allowing you to have fun immediately.
The Yow in our opinion is also more suitable for those looking for a very mobile truck to train their balance or to take long walks in the plains because it is less tiring. Wide carvates, relaxed style: in our opinion it is in these conditions that Yow gives its best, but we assure you that it does not disdain narrower and more radical maneuvers.
For a beginner, better a board a little longer that gives more stability. A long board is more suitable also for those who come from a longboard (both on the surf and on skate) and to those who are very tall.
The Carver Cx according to us is the most suitable for those who love being radical and want to train themselves to push really hard, as well as for those who also want to use the surfskate in the park.
To those who are undecided between Cx and C7 we would recommend ... Triton! Yes, because it is a good compromise in terms of feeling and behavior between the more rigid Cx and the more mobile C7. Are you looking for something more radical? Well then the Triton Xenon !

CONTACT US - REQUEST INFORMATIONS
This website uses cookies, including third parties, to send you advertising and services in line with your preferences. If you want to learn more or opt out of all or some cookies read the information here extended. By closing this banner or continuing browsing you consent to the use of cookies.