THE WINDIEST KITESURF DESTINATIONS IN JULY

Curious to know which are the windiest summer destinations? Then take a look at this list of the 10 windiest kitesurf spots in July that we got from Windy's statistics. These are obviously statistical data, based on observations recorded in previous years, so they do not offer absolute certainty for the future, but certainly very good chances of having luck with the wind by choosing one of these destinations for a next summer kitetrip. In our ranking we have included only destinations that are actually kitesurf spots and, having to choose only 10 is obvious that we have excluded many of them. Curious about finding out which are the windiest kitesurfing destinations in July? Here's the list. 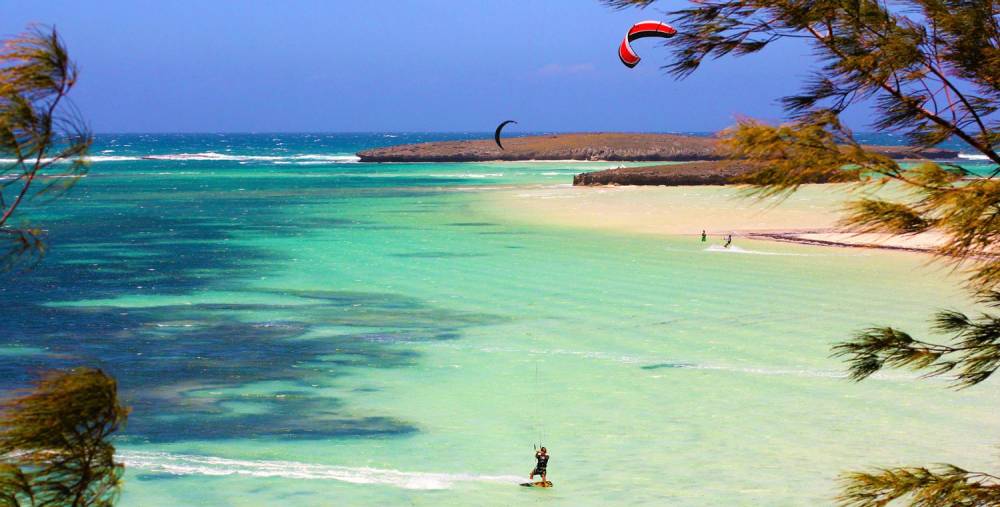 Madagascar, off the southwest coast of the African continent, is the fourth largest island in the world. Considered by the WWF as one of the countries with the richest ecological heritage in the world, Madagascar is also one of the windiest kitesurfing destinations in July. The spots par excellence are Sakalava and Mer D'Emereude both at the northern end of the island. Sakalava is a large bay protected by the reef. Inside the water is flat or with little chop, on the reef are formed beautiful funny waves and with side wind. Mer d'Emereude is another huge natural bay, enclosed by three islands. Here, too, on the reef, you can find beautiful waves, even if they are challenging and always with side wind. Crystal clear waters and beaches of a dazzling white, palms and lush nature, all caressed by the trade winds of south-east called Varatraza, which is really very constant and frequent and gives its best precisely in July when it generally blows between 25 and 40 knots! It is therefore mandatory to carry small sails!!!
Temperatures are always more than pleasant, even if the period from July to September is the coolest. Nothing dramatic anyway: a shorty is enough. 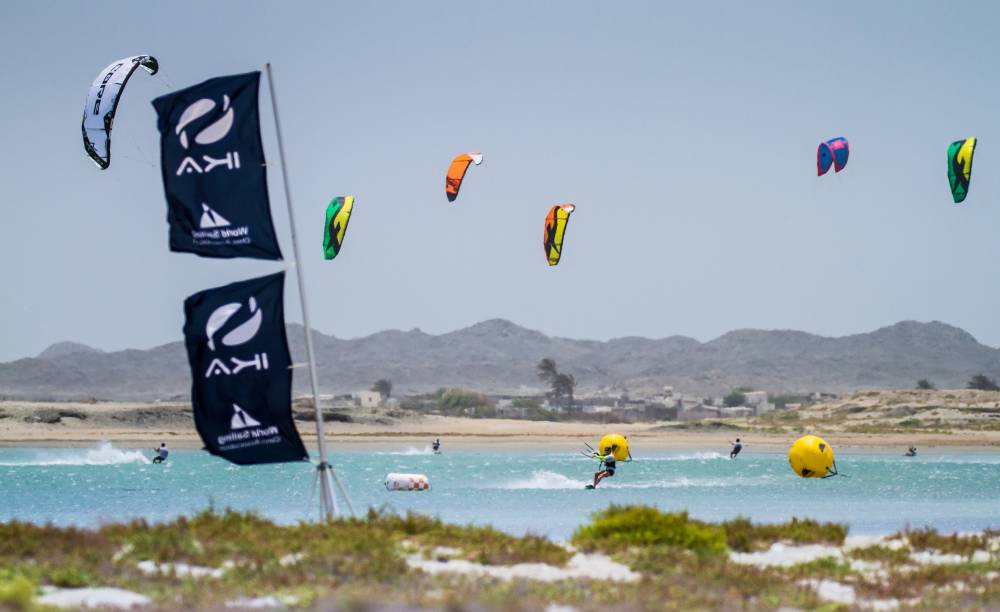 The island of Masirah - a jewel in the Arab Ocean - is the largest island in Oman and is located about 18 km from the mainland. The island, called the unexplored paradise of kitesurfing, offers countless breathtaking beaches with flat water in the lagoon and waves. A small quiet and peaceful island inhabited by fishermen. Masirah Island is famous for its large flat water lagoon, ideal for beginners and freestylers. During the summer months, from June to September, with July as the peak month, the winds constantly blow between 20 and 45 knots, while the air keeps between 24 and 38 ° C, so your only problem here in July is the too much wind... but if you love small sails this destination is perfect. If you're looking for certain wind, uncrowded waters and an original kitesurfing destination and off the beaten track, you've found it!
The only downside is that it's not very comfortable to reach. The best way to date is to fly to Muscat in Oman and from there rent a car and drive for about 4 hours to Masirah where you can embark on ferries to the island (the crossing takes about half an hour).
Of course the trip is quite long, but take a look at the wind statistics ... and maybe you'll think about it 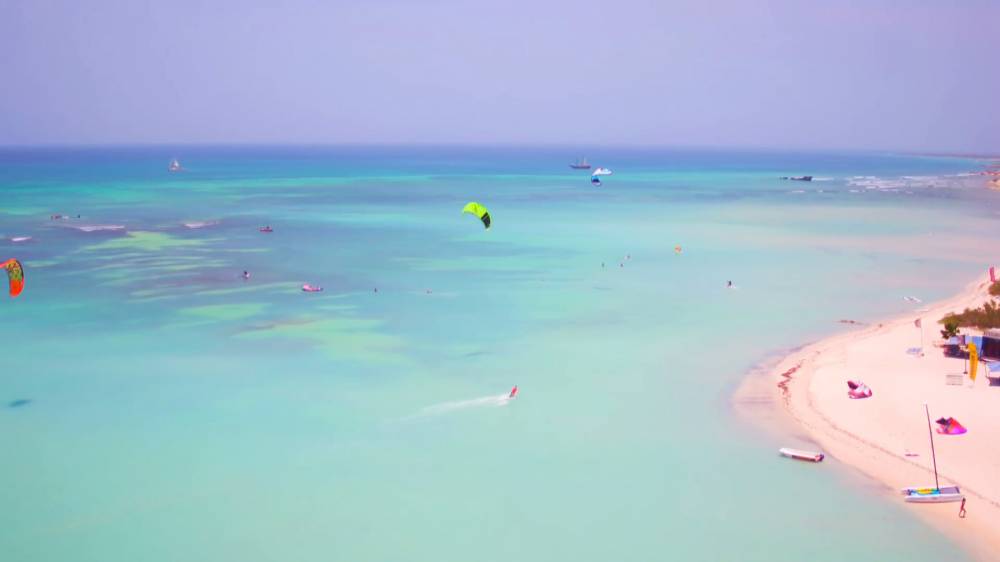 Located in the Caribbean Sea, north of Venezuela, the island of Aruba is a popular destination for kitesurfing and more. White sandy beaches, turquoise lagoons, coconut palms and extra luxury resorts. What made it famous among the kiters are its really remarkable wind statistics, which make it probably the windiest island in the Caribbean, always at the top of the charts of windguro & co in summer. On the other hand, the spots are not suitable for all levels because the wind is almost always off shore and super gusty under the shore because of the hotels. Another downside is that the island is notoriously particularly expensive, but if the budget is not your problem, why not? From here you can also visit some of the surrounding islands such as Bonaire and Curaçao, both equally windy. and the relevant statistics and you will find that they are not just winter destinations. 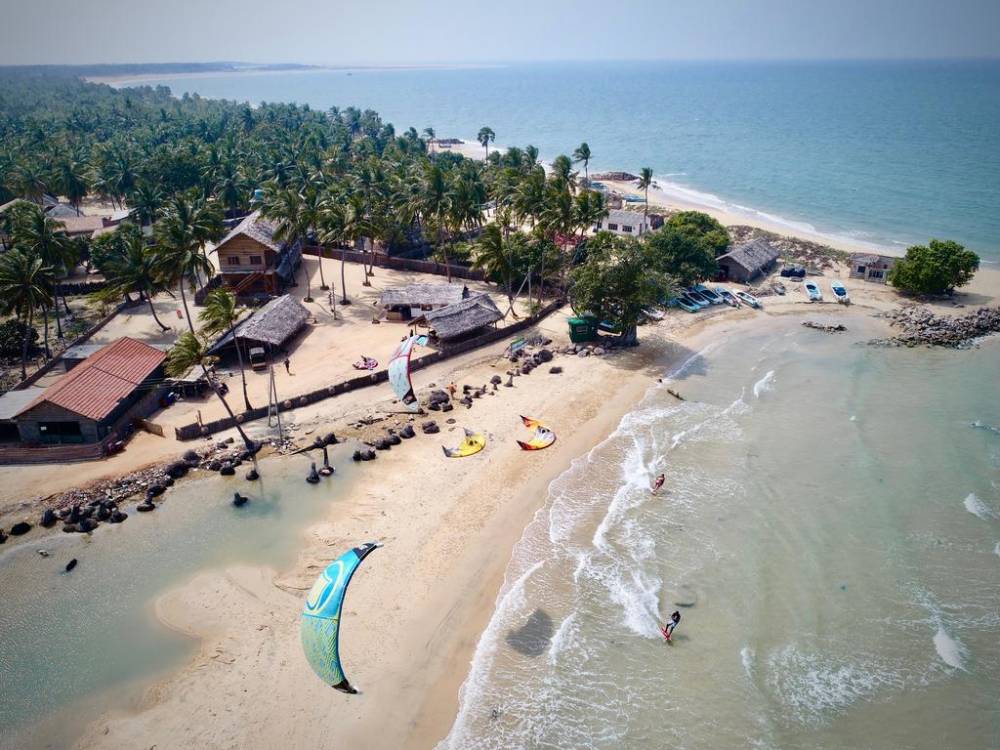 Kalpitya is located on the tip of a long peninsula separating large lagoons from the ocean, on the west coast of Sri Lanka, about two hours from Colombo airport. Kalpitya is the destination for kitesurfers in SriLanka: a collection of fantastic and uncrowded lagoons overlooking a long beach. There are two seasons for kitesurfing here: the SO monsoon (from May to September) and the NE monsoon (from December to March). In July, when the wind generally blows between 18 and 25 knots day and night, practically non-stop! A daydream for beginners and freestylers. Wave seekers can move to the ocean side outside the lagoon or look for waves on some reefs, or cross the country and reach Arugam Bay where in this period there are often strong side winds off shore. SriLanka is a rather poor country so you can find really cheap accommodation and even flights are not very expensive. On the other hand, the recent attacks have a bit 'slowed down the tourism sector that was booming, but the situation seems to be back to normal. 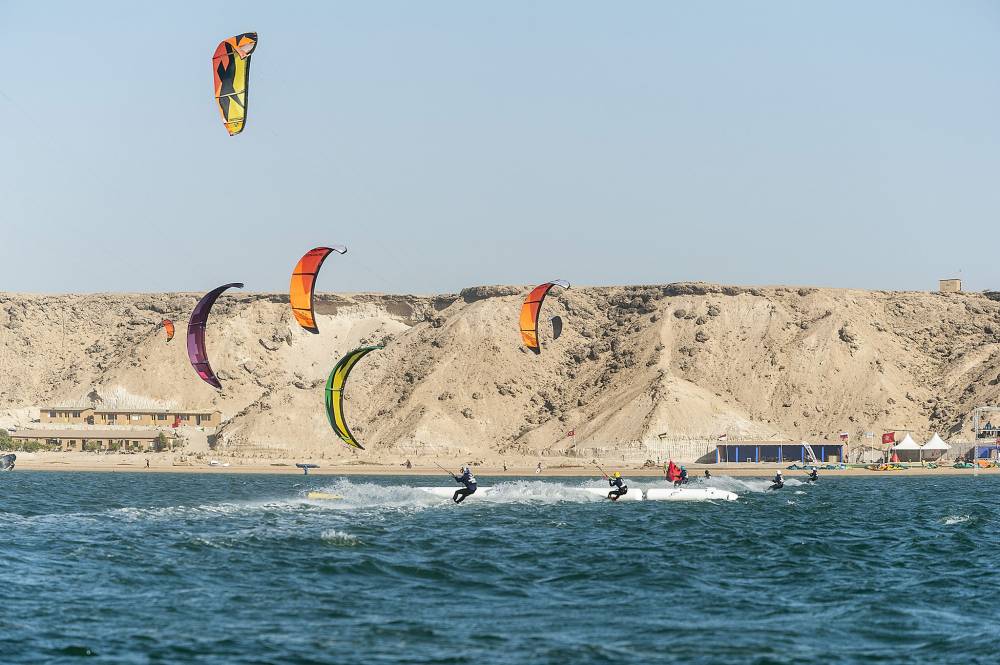 Dakhla, in the deep south of Morocco, where the Sahara desert reaches the Atlantic Ocean, is one of the top destinations for kitesurfing all year round. Dakhla is a small town once frequented only by fishermen and today an international kitesurfing mecca located on a large peninsula that on the one hand overlooks the Atlantic Ocean and inland creates a lagoon of flat water. Here the wind blows uninterrupted almost every day of the year and especially in July: when your only problem is to get a sail small enough because the wind blows easily at 40 knots. If you prefer waves, or simply if the wind in the lagoon is too strong, there are several wave spots on the Atlantic coast as Point de l'Or excellent for getting closer to the wave, Foum Labouir with its famous right hand on sand, or the wild spot of La Sarga, at the end of the peninsula of Dakhla. 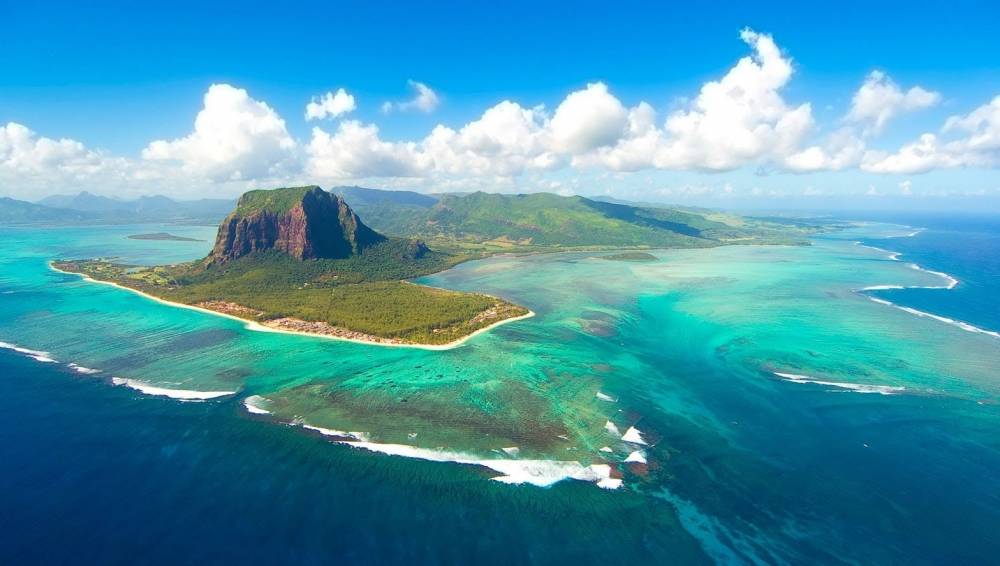 Mauritius is a tropical daydream, but not only. Mauritius is also one of the most famous kitesurfing destinations thanks to the excellent wind statistics, especially for the months that correspond to our summer. Le Morne is without a doubt the world's Mecca for wave riding lovers with some of the most famous waves for kitesurfing such as Manawa and especially One Eye. But Mauritius is also suitable for beginners and freestylers The best season to visit Mauritius is from May to November, which is not only the windiest period but also the driest. In July the wind blows constantly from the southeast with an average intensity of 20 knots. To stay in Le Morne there are various solutions from the most luxurious resorts to the many apartments for rent at affordable prices. The climate in this period is dry and being very windy a bit 'cool but still pleasant. You can expect a shorty wetsuit to go into the water and some jerseys for the evening. 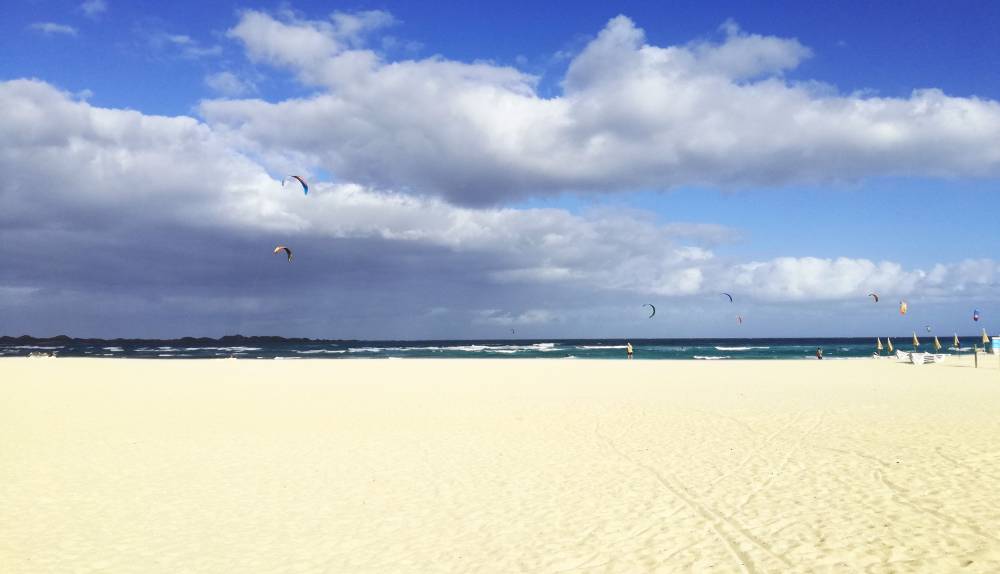 Fuerteventura is one of the most popular kitesurfing destinations in Europe. Its main spots are two, both with excellent wind statistics: Corralejo, in the north of the island and Sotavento in the south. Sotavento is a flat spot almost always chosen by many kiters to train in freestyle maneuvers, while the lagoons that fill up at high tide are the ideal place where hundreds of kiters attend courses every year. Corralejo is a spot with chop or small waves during the summer months but that can give good wave conditions if the right swell comes in, something that happens more often in the winter months ... but never say never! For all the information about the other kitesurf spots and to better organize your kitetrip I suggest you read this kitesurfing guide in Fuerteventura. If you are looking for something less crowded, try Lanzarote, equally windy but certainly quieter in the summer. 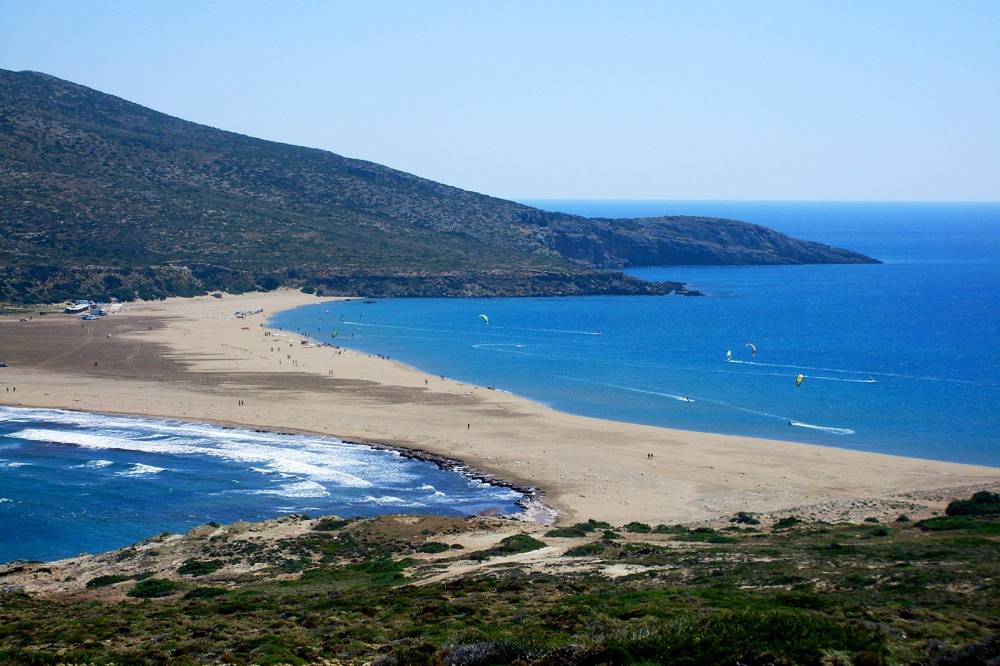 The island of Rhodes in Greece is one of the most visited by kiters, along with kos and Lefkada. Rhodes is distinguished by its excellent wind statistics. The main spot in Prasonisi is a strip of sand that connects an islet to the mainland forming two bays. On one side the Mediterranean Sea, on the other the Aegean Sea. Like the other Greek islands, Rhodes in summer is exposed to the meltemi that enters from the quadrants between NW and NE with intensity even up to 35 knots. When the meltemi does not enter, however, there is a good chance of exploiting the thermal winds. A holiday in Greece is undoubtedly an acceptable compromise for all those who travel with partners who do not kitesurf, or simply for those who do not want to make so many hours by plane and looking for a destination low cost enough. 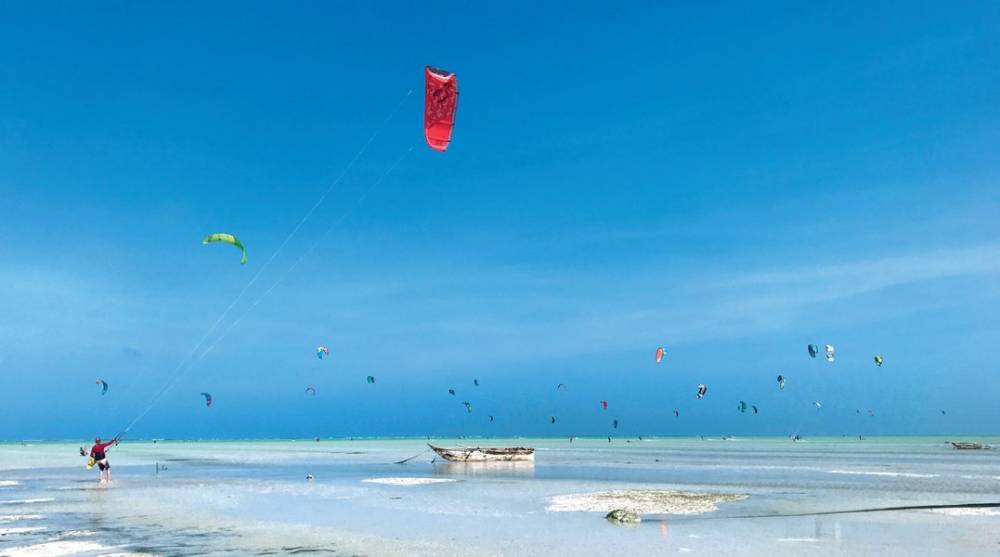 The island of Zanzibar is located off the coast of Tanzania, a few degrees below the equator and is affected by two seasons of trade winds corresponding to our winter, from December to March and our summer from June to September when the Kusi blows from the southeast. The summer monsoon is a bit stronger than the winter. One of the main spots for kitesurfing is Jambiani - Paje: a lagoon of turquoise water surrounded by the coral reef where the wind always enters side on. The reef is about a kilometer from the shore, it is only about fifty meters wide but long kilometers so that lovers of wave often throw themselves in endless downwind. In July the wind blows from the south-east with an intensity of between 15 and 25 knots. In Zanzibar there are also many other spots and almost all are characterized by lagoons sheltered by the reef. 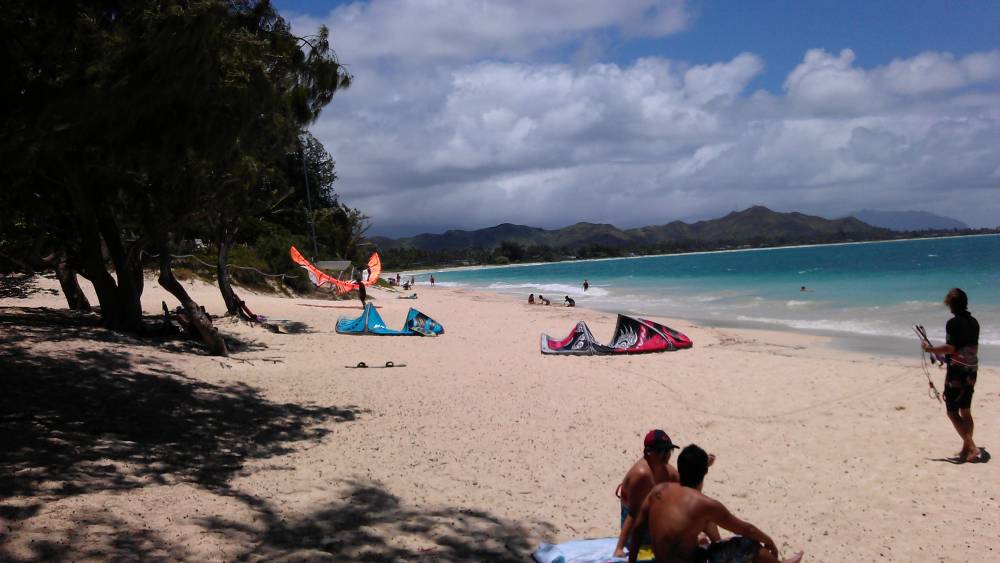 Could we not list at least one spot in Hawaii, where it all began? Ohau is probably not the most popular kitesurfing destination in Hawaii but it's definitely one of the windiest and the only one with spots accessible even to beginners, the most popular being Kailua. Trade winds blow from the east, north-east and then side onshore with an average intensity of 20 knots in July. Clear turquoise water, tropical vegetation and white sand complete the picture. In addition, of course, a holiday in Hawaii always deserves and the ideal would be to combine a tour of the other islands.