What happened to the skate industry and beyond

Are you looking for a new surfskate or a new surfboard, wing or kitesurf but can't find anything in the shops? Are you going crazy with pre-orders, delays and missed deliveries?
Unfortunately, you are not alone.

The situation concerns the whole table sports industry to a bit, indeed all individual sports and many other sectors as well. And of course it also concerns surfskates, unavailable, increasingly expensive and increasingly desired.

From our online surfshop point of view, we have seen the explosion in demand for surfskates for a year now .
It all started with the Covid 19 pandemic and the first lockdown.
People, suddenly locked in the house, have turned to the surfskate as one of the few viable alternatives to rediscover the sensations of surfing even around the house, in the parking lots, even on the terraces. I swear I saw with my own eyes building surfskate ramps on the terrace ... I hope the parapet was high enough !!!

It wasn't just surfers who got hooked on the surfskate, although they were undoubtedly the first. The surfskate has infected many people who did not belong neither to the world of surfing nor to that of traditional skateboarding. Dads who did some skate as kids bought one for themselves and one for their son and many mothers got infected too. People of all ages on the table. The beauty of the surfskate is just that!

After the initial euphoria, overwhelmed by the expeditions in the middle of the first lockdown, we soon realized that something was not going the right way . Already in June last year, surfskates began to run out, deliveries to delay and waiting lists to get longer. In July, there are those who waited over a month to have Carvers and among these also some VIPs, they waited just like anyone else.

We started pre-ordering a lot more stuff, but deliveries started to slip or skip altogether.

And the situation has not improved at all in the following months, quite the contrary. Suffice it to say that at Christmas many were unable to put a surfskate under the tree, despite having ordered it in time. 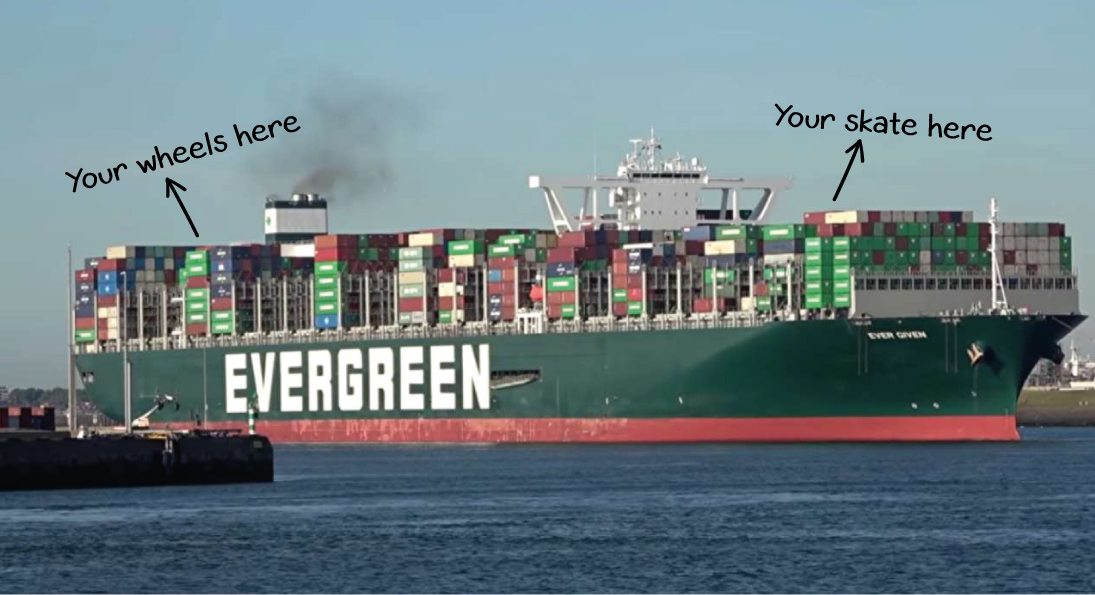 Why don't the surfskates arrive?

Most surfskates especially most of their components (wheels, bushing, bearings) are produced on the other side of the world, in China.

The reasons are many and not all are exactly the same but at the root of the problems there was on the one hand the sudden increase in demand and on the other the inability of the industry to cope with both the difficulty in supplying components and raw materials, and because generally these supplies are planned with pre-orders long before and the pre-orders are made on the basis of the sales of the previous year. And no one had anticipated such an explosion in demand.

During the first lockdown, many factories in China stopped completely for a few weeks, immediately causing major delays in the production of components. But the pandemic has not only had a heavy impact on production.
Shipments were immediately the weakest node in the industry with shipping traffic halved, containers stopped for weeks in the ports waiting to embark, and of course the prices that immediately skyrocketed.
Almost a year after the problems began, the Evergreen ship literally got in the way , the icing on the cake of an already extremely compromised situation.

The prices of material shipments from China have increased by an average of 300 - 400%. This has often forced companies to postpone shipments of small batches to merge them into a single shipment, in order to try to stem the soaring prices of raw materials and components. Increases that have however spilled over to the prices of surfskates and not only of these.

And even manufacturers who make their own skates like Yow have to contend with a lack of wheels or other components.

Same thing for two of the biggest European surfboard factories that have seen the production times of a board go from 2-3 weeks to 2-3 months due to the difficulty in finding resins, fibers and so on.

The pandemic has simply made it clear that a high reliance on things produced half a world away carries risks . Goods make their way from Asia to Europe and the United States on huge merchant ships and the shipping industry is going through a serious crisis: hundreds of thousands of workers are still stranded at sea because travel restrictions in the event of a pandemic of their home countries prevent them from disembarking.

In addition, the commercial model for most of this equipment is that of Just in Time . New collections come out every year, or even every six months. No large investments are made to keep in stock what is already out of fashion next year. Costs are kept low by keeping very little on hand and shelves are stocked with freshly delivered products; there are no department stores in Italy or even in Europe full of the equipment you are looking for but only large sorting centers for goods arriving from China and distributed to the shops. This means that it takes very little for store shelves to empty quickly.

When will everything go back to normal?

Unfortunately, we are unable to make any predictions in this sense but the impression is that the situation is not destined to resolve itself anytime soon .

But there are positive signs .

Some companies have begun to reflect on their dependence on external suppliers, particularly Chinese, organizing themselves to bring production back in-house. This is how Yow has just announced that it has started production of its wheels in Spain and that the first batches are now ready. While some local artisans have organized themselves to increase their productions, at least trying to limit dependence on foreign suppliers.

Where all this will take us is too early to say, but it  would be nice if small local producers came out strengthened.

In the meantime, what do we do as a shop?

We simply try to do what we do best: we inform you about what is happening. We update you on incoming shipments, we give you the possibility to book what you are looking for and to cancel the reservation when the wait becomes too long and we offer alternatives.

Hydrofoil in aluminum and galvanic corrosion

Compared to full carbon hydrofoils, aluminum hydrofoils have the undeniable advantage of a much cheaper price. On the other hand, they also have some negative aspects that it is good to know BEFORE buying,