Equipment and tips to get started

Wing skateboarding is a new and super fun way to surf the asphalt using the traction of a wing surfing wing.

In reality, the Wing is by now not an absolute novelty, and was not created for use on land but in water, where it has already been widely established. The beauty of the Wing wings, however, is that they are very versatile and lend themselves well to being used not only in water, but also on land or perhaps on snow or ice. And if you are wondering why you should use a Wing with your skate, we give you 3 good reasons to do wing skateboarding:

1. To have fun with your Wing even away from the sea, which is no small feat during these repeated lockdowns

2. To train wing foiling by  practicing on land gaits and maneuvers before going into the water

3. To touch the potential of these new wings, understand why they are having this enormous success and why it is fun and not particularly difficult ... believe us!

Testing the wing in the water is not so fun the first few times because you will hardly be able to lift the board and make edges with the wingfoil right away. Many trying it directly in the water do not immediately grasp its potential and struggle to imagine the magic of sailing suspended half a meter above the water, in absolute silence, surfing and chasing small soft waves. All this is easier and more evident with a surfskate board under your feet.

Try a wing with a skate for just half an hour and a world of possibilities will open up ... we are sure that you too will become wing-addicts and you will not be able to do without it.

If we have convinced you, let's take a closer look at which equipment to choose and some tips to start with the wing skate. To be able to wing skateboarding you will obviously need a Wing wing and a skateboard. In addition to this it is advisable to use a helmet, protections and choose a suitable spot ... but let's go in order. 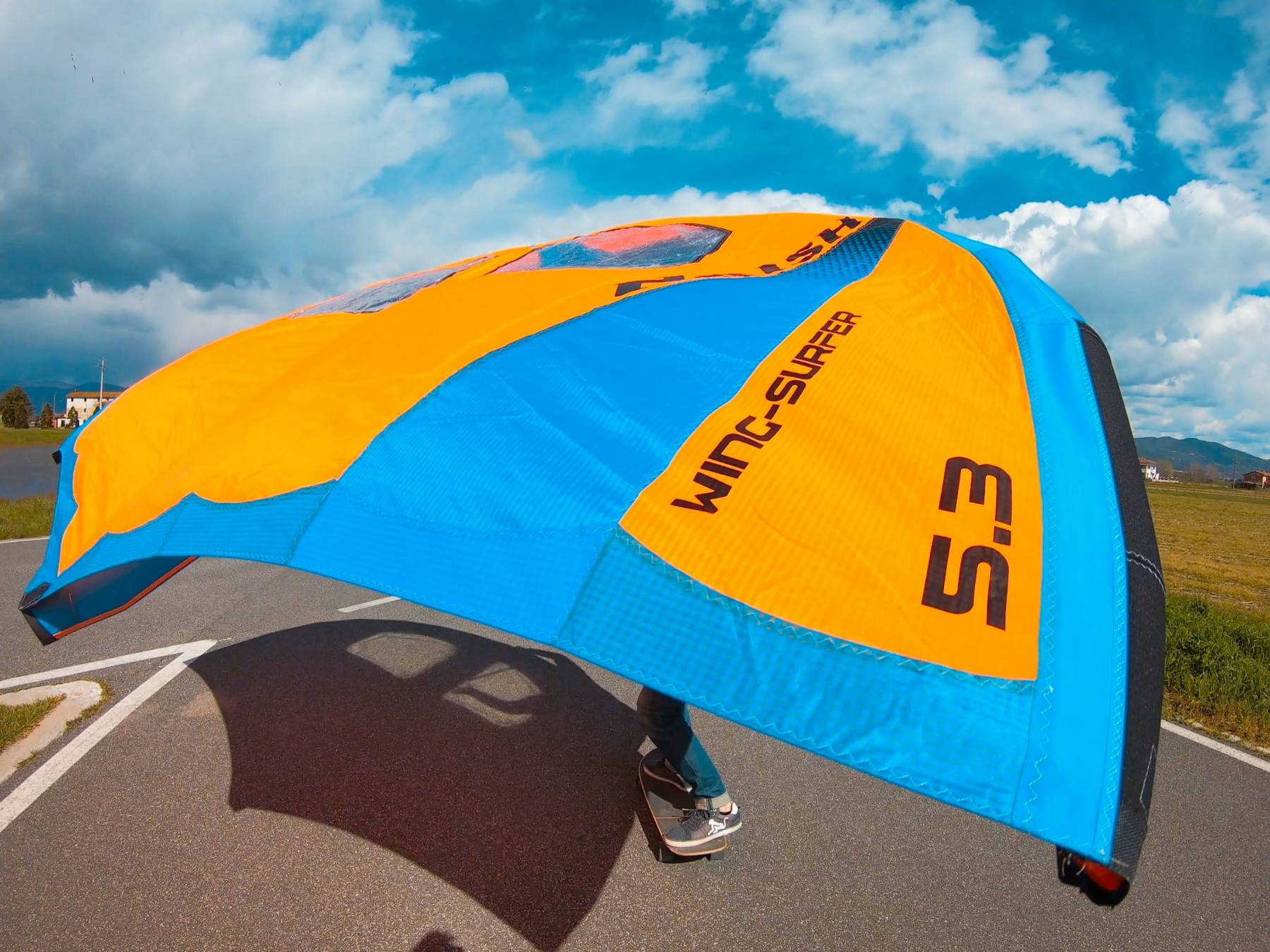 Wingsurfing sails are made with the same technology as kitesurf wings and there is no rigid part. Rigidity is guaranteed by inflatable tubulars or in rare cases by a rigid boom. The sail is held directly with the hands, through the handles on the boom (usually inflatable) and secured with a small leash on the arm to prevent it from flying away if for some reason you let go.

As in the case of any equipment, the market offers a good amount of models, each with unique characteristics. Orienting yourself at the beginning is not easy, but the main aspect to pay attention to is that of the size as the size affects both the handling of the wing and the wind range that you will be able to exploit.

The dimensions of the Wing wings range from 3 to 6 square meters but the central measures (4 and 5) are the most common and used. The size of the wing, as for other wind-sports, should be chosen according to the wind range that you intend to cover and clearly also according to your weight, the board and the foil you use. Using the wing with the skate the situation is a little less complicated as the Wing will not have to provide you with the necessary thrust to lift the board from the water, as you are already standing on a skateboard. For the same reason it is also possible to use a smaller sail than you would use in the water and to take advantage of even lighter breezes.

If you want to buy a Wing to be used exclusively on the ground with the skate, we recommend a size around 4, but if you don't want to preclude yourself from using it in the water, a 5 is better. Not that a 4 is not suitable for use. at sea, but a larger sail will provide you, especially at the beginning, some support and will allow you to take advantage of lighter winds, without becoming too bulky or unwieldy. In any case, a 5 will in no way preclude you from having fun with your skate and has no particular disadvantages compared to a smaller size.

For example, we used a Naish 5.3 and here are the pros and cons of this size, to help you choose your ideal size

PRO: possibility to take advantage of really light wind, well below 10 knots. Size more suitable for use at sea

CONS: the larger size increases the risk of touching the ground with the tip, especially the first few times. From the second time it is very rare to touch with the tip on the ground and in any case the risk does not disappear with one size less. 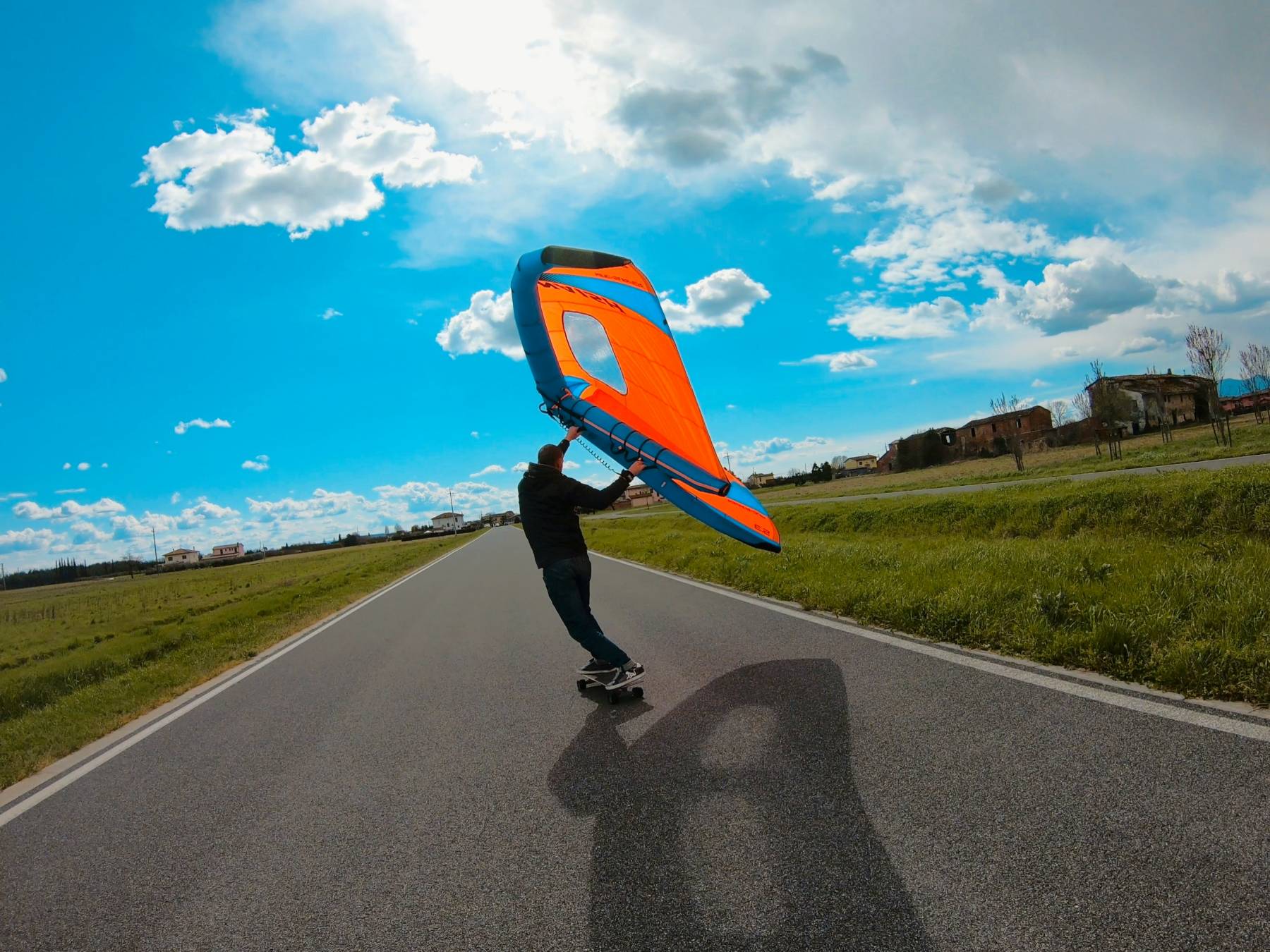 As for which skateboard to use, here too there are several possibilities to choose from: longboard, mountainboard or surfskate are the most suitable types and among these we undoubtedly recommend a Surfskate.

The advantage of a surfskate over other types of skateboards lies in the maneuverability and ease of carving and very tight turns. If you're wondering if it's not easier with a mountainboard because of the straps, our answer is no. Bind yourself with straps to the board, while a sail drags you pushed by the wind is not a good idea. The risk is that you will not be able to brake until you are familiar with this sport and having your feet in the straps may make it difficult for you to get off on the fly if you need to.

Which surfskate is best suited to be used with a wing?

Leaving aside specific brands and models, we advise you to use surfskates with these characteristics:

- Wheelbase: choose a surfskate with a not too narrow wheelbase (we recommend 17+), because otherwise when the speed increases it becomes more difficult to control.

- Truck: basically any surfskate truck is fine. For the first few times, if anything, tighten a little for greater stability

- Wheels: Big is better. Prefer wheels of 70 or even 75, and soft enough so as to have good grip and better absorb the roughness of the ground.

Before choosing the place to try to use your wing with the skate and the right day, here are some considerations.

How much wind does it take to wing skateboarding?

Not much. Definitely less than what is needed to wing foiling. Let's say that the ideal is to have about 8/10 knots, possibly constant.  Be careful that the wind is not too strong because the first few times it is not so easy to control the speed.
Unfortunately in areas near cities the wind is often far from constant, but don't worry too much about it. The Wing, unlike kitesurfing, does not fall if the wind fails. Even if the wind drops you for a few moments and decreases in intensity it is not a big problem as you can still compensate by pumping on your skate and holding the glider in position waiting for the next gust. Even the strong wind is very easily managed with the wing and any gusts of greater intensity hardly become a problem and in any case it is always possible to completely foil the wing by holding it only by the handle on the leading edge. Once you have become familiar with your wing you can effectively exploit even slightly lighter winds and have fun up to about 20 knots ...

Where can I do Wing skateboarding?

Wherever there is enough space to have fun and the beauty is that you don't need huge expanses. The important thing is that the space you choose is not too sheltered from the wind, because for example it is surrounded by tall buildings. Apart from this, any space or street with no traffic can be fine. For example, you could take advantage of the parking lot of a supermarket (when it is closed of course), a sports field and possibly also a space with clay or low grass ... but in this case ok for any holes, stones, etc.

Is it very difficult? Do you need special skills?

No, it is not difficult and it is within everyone's reach. The only important thing is that first you have to know how to go surfskate or skateboard, control the pace and some speed .

No, it is not dangerous. Provided of course not to overdo it with too strong wind. In any case, before getting on the skate practice a little to keep the wing in the wind to understand how it works.

At first yes, holding up the sail with the strength of the arms the first few times tires a little. Once you perform the movements correctly and acquire the right technique, fatigue decreases a lot. The sail is kept in the air by the wind and the arms no longer have so much effort. 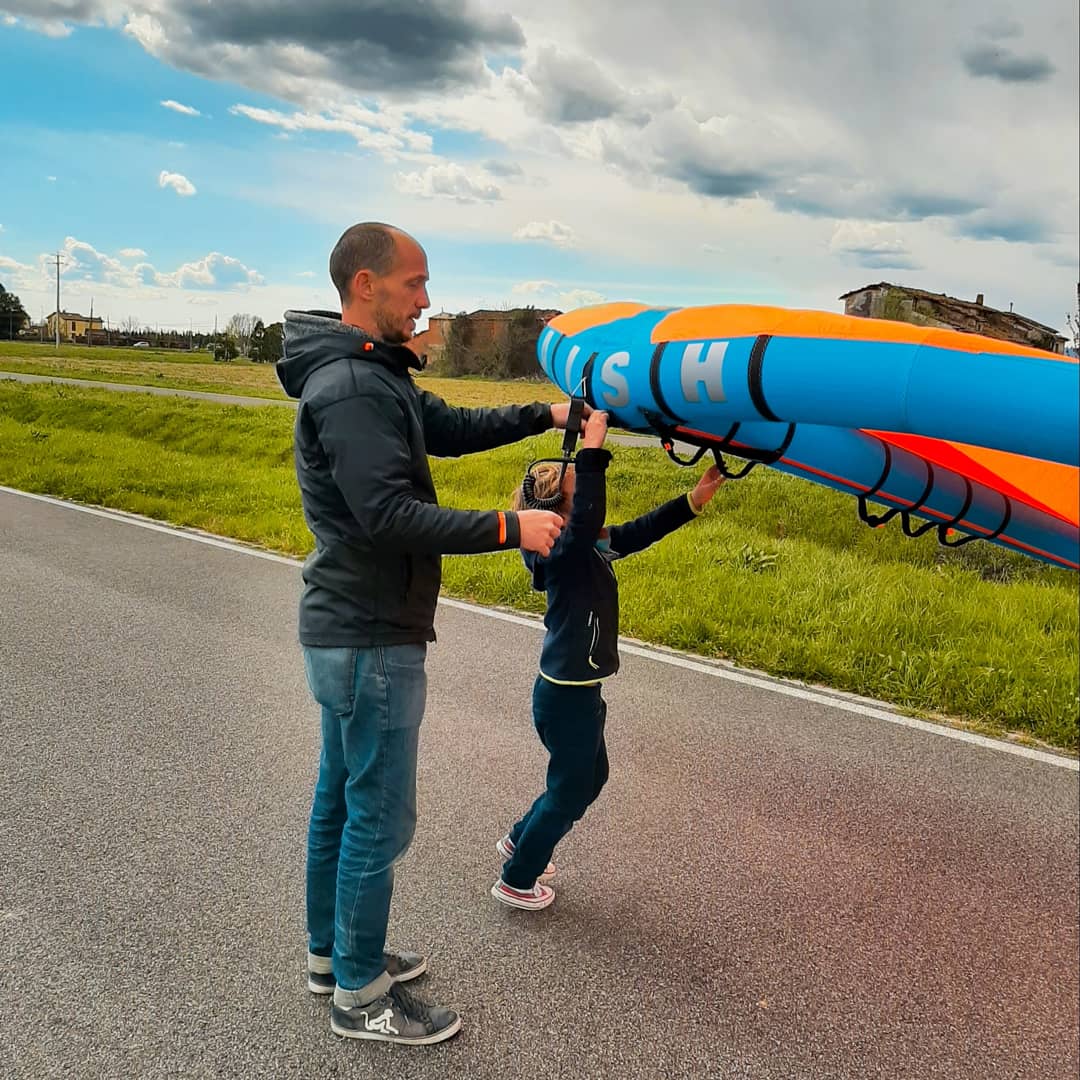 Hydrofoil in aluminum and galvanic corrosion

Compared to full carbon hydrofoils, aluminum hydrofoils have the undeniable advantage of a much cheaper price. On the other hand, they also have some negative aspects that it is good to know BEFORE buying,