Wingsurf: what you need to know to learn right

Tips and the right equipment to not waste time.

This winter our dear friend Luca Saponiero (Sapo) spent a couple of months in Tarifa, not only doing kitesurfing from morning to night, but also to calmly dedicate himself to learning Wingsurfing. Once back we decided to let us reveal all the secrets and tricks that he discovered and to share them with you to help those who start learning much faster and above all not to waste time with the wrong equipment ... and here is his story .

Last December, in Brazil in Sao Miguel, I met Paolo Migliorini who was already passionate about wingsurfing and seeing him jump and do maneuvers made me glimpse the possibilities of this new sport.
I state that I am 52 years old, many years in windsurfing, many in kiting but also always a great desire to put myself in new challenges. At first seeing the wing surfing on the internet I confess that I thought "what the fuck !!!" and instead after seeing it live I decided to give it a chance and ... another love was born !!

Unfortunately, I hadn't been able to try it with Paolo, also because the conditions were a little difficult at sea and wind, so when I returned to Italy the desire was so great and I immediately started looking for the right equipment, immediately discovering that being a very new sport it is not easy to find reliable information.
I was in Tarifa from 26 December 2019 to 4 March 2020 especially with the idea of ??I weigh 80 kg and I am 180 cm tall. I was already kiting foil, although not so often. However my idea initially was to use my 65 cm long Fone column and the front wing gravity 1200 (Moses wave type to be clear), but I was wrong . With that equipment I would have lost many outputs to do what instead, with the right equipment I did in 10 minutes.

Fortunately, on the advice of  Max Galtarossa I had had a table made on the 130 liters (Mother ship model full carbon) which was the right volume for my weight. In addition, I got a front wing gravity from 1800 , instead of what I had from 1200.
130-liter table and front wing from 1800 were in my experience the two decisive elements, those that really made the difference and that they are revealed even more important than the size of the wing.
Paolo in Brazil had told me " you will see that after 10 minutes you understand everything ", yes it is indeed so but even more the merit was of the very large front wing. Without it I would never have been able to get on the wingfoil immediately. 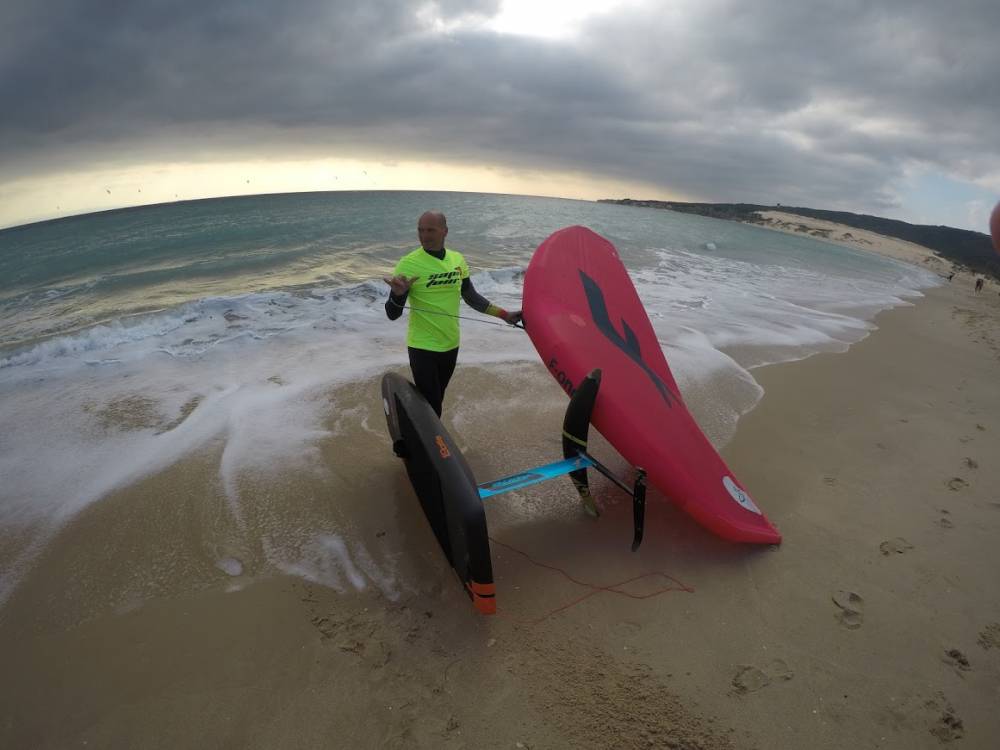 Too bad I don't have a picture with my stupid face that says  evvvai that figataaaaaaaa , the first time I got up with the wingfoil !!
I have been a kitesurf instructor for 20 years and before I did another 15 years of windsurfing and I think I have, as we say in Genoa, the "marine foot", but the most important thing to learn quickly is, I will never get tired of repeat it,  CHOOSE THE RIGHT EQUIPMENT . And by this I mean that it is useless to buy something definitive with the idea then not to change it!

My advice therefore is to choose a board with a good few liters (I would say at least fifty liters more than your weight). The reason is that the board must allow you to climb on it and stay afloat until it floats. The concept is the same as windsurfing: the less wind you have on the wing and the less the board is stable. Then of course the sea also affects, whether it is chopped or flat. But to start naturally you have to look for sea conditions that are as flat as possible. A board with a few liters, which does not support your weight, is too unstable at the beginning and also requires too much effort to send it on the plane because it forces you to pump continuously with your legs, with the result of bursting after 20 minutes!

Now that I have accumulated thirty outputs, I am ready to move to a board with a little less volume, which is certainly more manageable, possibly to be combined with an even larger front wing. The limit in my experience is about 15 liters more than your own weight, so for me who is 80kg a board, for my current level, it cannot have less than 95 liters. Otherwise I would need too much wind to go out.

In just over two months in Tarifa I think I have made around thirty exits in optimal conditions, also because the others I went out with the Kite.
I understood that this sport combines many different sensations, some common to others that I already did, others completely new to me.
Having the wingfoil in your hand gives you a fantastic feeling and for this reason I think it will be a sport that will have a lot of success. In addition, it offers the advantage of being able to use it even without a foil and therefore with a Sup or Surf board.
One thing that impressed me about the wingfoil is that as soon as 10/12 it is possible to glide, go up the wind and have fun …… .I didn't believe it either! But the beauty is that then, even if the wind increases, keeping the wing open like a bird's wing it drains a lot.
One of the most beautiful things besides the planar was also getting rid of the trapeze, so wetsuit, shoes, impact, and of course helmet !!

I learned  strapless  and never used straps. However, now I felt like putting them to make it a bit more freestyle !!!! ........ other than going back and forth !!!

One of the things I noticed is that the use of the wing is quite simple so even a novice can use it safely.
Secondly, even those who are not an excellent swimmer could approach this sport because the Wing is always attached to the wrist, and is an excellent lifesaver. Thirdly, the age and more generally the audience of use is really wide because it includes all those who would like to do something at sea, without however going into too radical sports such as Kitesurf, windsurf or Surf
And then just think of the infinite possibilities: we can add us under a nice Mountain board or if there is asphalt a nice skate !! 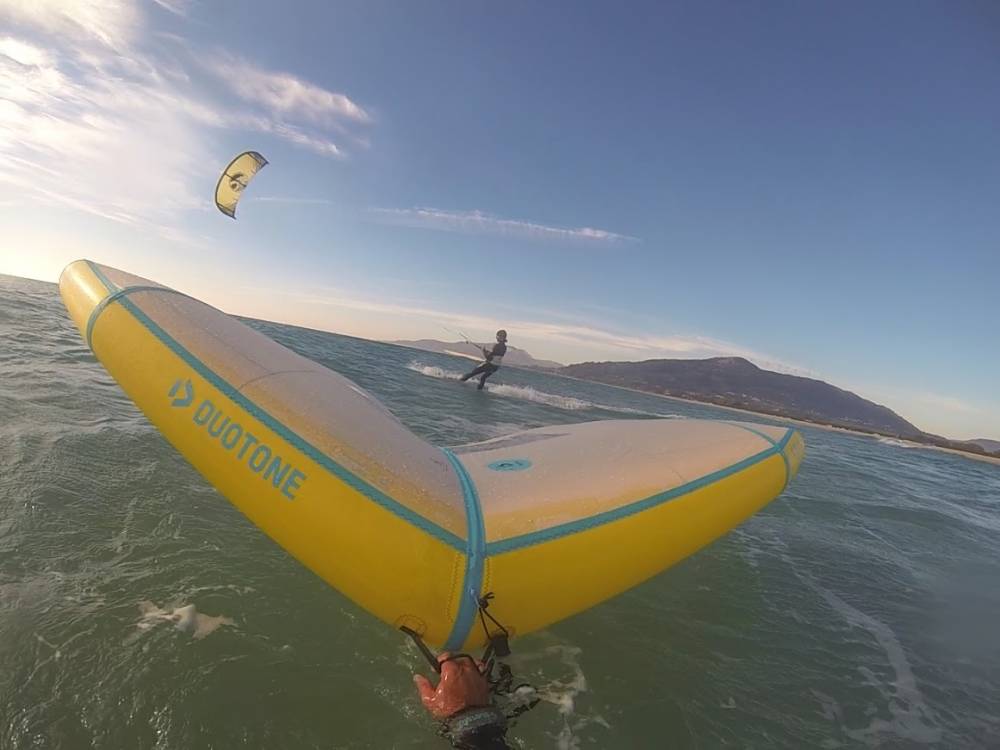 The Test equipment I had available was: