Wing surfing is this new discipline that is literally exploding. Many brands that already produce kitesurf sails are proponents their wing wings and the curious who want to try are more and more.

Wingsurfing is presented as a new, fairly accessible sport because it is relatively simple to learn and fun. Furthermore the wing wing price is much lower than for example a kitesurf wing.
Another thing that makes it interesting is its versatility.
A wing for wingsurfing can be used on water, but also on land with a skate or skates and of course on the snow.

1. What are the ideal conditions

Being a discipline that is still very new and developing, the reality is that the real limits of these new wings are still being tested.
Initially presented as an alternative for light wind, wing wings actually need some wind to provide the necessary boost to lift the board from the water and use the foil, both to float in the air and cancel thus its own weight which should otherwise be supported with arms.
What does a little wind mean? As for a kitesurf or windsurf sail, the wind range of a wing sail varies according to many factors which are:
- Wing
size and model - Size and model of table used (in particular the hydrofoil that mounts greatly affects the table)
- Weight of the rider
- Ability of the rider (because with the pumping you can help a lot and you can also create apparent wind ...)
Having said this to take advantage of a wing of about 4mq (which is the most common measure in circulation) a rider of about 70kg will have need about  14-15 knots of wind.

If you want to know more about the wind range and the models take a look at our shop or ask us for advice.

2. Which table to choose for wingsurfing.

The wingsurfing wings are born to be used with a hydrofoil, therefore with surfboards / sups equipped with foil, this does not mean that they cannot be used also with a normal stand up paddle board, possibly also of the inflatable type. The top, however, is the use with a foilboard.

For those who are beginners even with foilboard it is important to choose a table with a lot of volume, able to support the weight of the user. This makes the start and the first maneuvers much easier, because very trivially you can leave standing already.
Indicatively a beginner should use a sup with a volume equal to his weight plus about 40 liters. A beginner who weighs 70kg should therefore use a supra of about 110 liters which is more than enough to prevent it from sinking. Naturally the foil must be sized accordingly and have the right bearing capacity.

An intermediate level rider (who already has at least a minimum of mastery of foiling and is not entirely new to sports such as windsurfing or kitesurfing) can orient himself on a board with a volume equal to its weight or slightly higher.

Finally, experienced riders may be able to choose boards that are closer to the surf than to the sup with a volume even of 15 - 20 liters lower than their weight.

Brands like Fone have already developed tables for use with the wing. Their characteristic is to be very manageable and guarantee a lot of volume in an extremely compact form. For example the 5.4 Rocket Wing has 60 liters! Despite its extremely compact dimensions, it is therefore a much less extreme thrill than a surfboard foilboard that generally has many fewer liters.

There is a lot of curiosity but many are still trying to understand what exactly makes a wing possible. Many wonder if it is possible to jump and freestyle, if it can be used to surf the waves, how much it can bounce, how fast it can go and so on. To answer, it is enough to take a ride on youtube where ever more videos show how the developments are continuous and the limits seem to shift every day.
Wing wings can be used for freeridingand therefore simply to surf and have fun even with a board without foil. With a sup board it will be a little more difficult to ride, and the handling is not at the top, but with a little technique and a not too bulky sup you can have fun. Clearly adding to the sup a hydrofoil will go faster the thing will become more interesting also as a challenge.
The wing can obviously be used as a propeller for surf foiling and therefore substantially as an aid to return to the peak without effort, surfing and having fun with the waves.
Finally there is freestyle . Well yes the wing allows you to jump ... provided you use a compact table of course!

4. How difficult and tiring is it?

The difficulty in learning something new is always something very subjective, and so is fatigue.
On youtube videos that promise you to learn in 5 minutes turn ... well they also shoot videos that promise to teach you surfing in 5 minutes, but honestly it's not realistic. In five minutes maybe you can learn if you call yourself Airton Cozzolino, otherwise it will take a little longer. How much more also depends on what other skills you already have. Do you already know how to surf? Surf foiling? Do you have any knowledge of windsurfing or kitesurfing?
If you are really starving of everything the advice is to start using the wing with a sup, without the foil, and this you will probably be able to do it already in one day. After a few exits you will already have a minimum of sensitivity towards sailing and sailing and in a short time you will want a smaller board or you will go on to add hydrofoil.
As for fatigue, if the wind is sufficient the wing floats in the air so it's not too tiring. Then like everything, refining the technique your movements become more and more efficient and waste less and less energy. 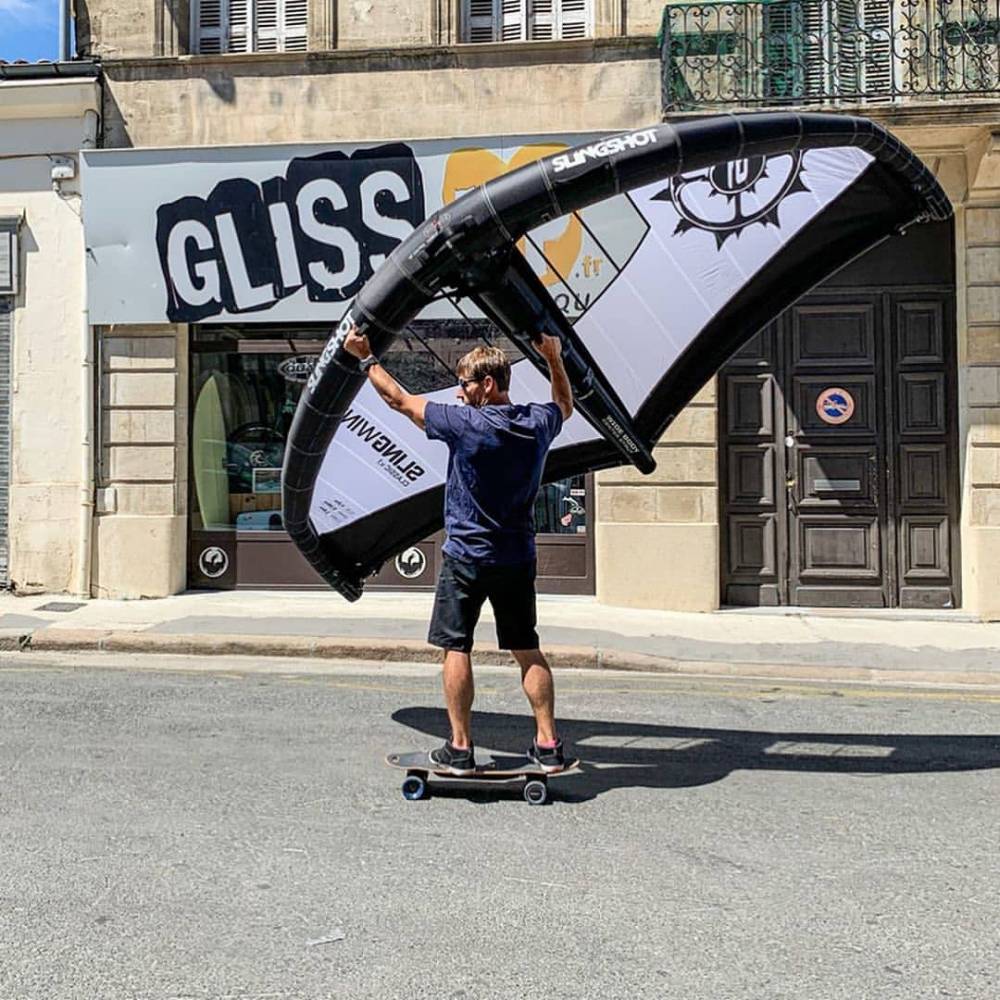 The wing was born to be used in the water with a foilboard. However, it has been extensively tested on the ground and who did it assured us that it is really fun to use with the roller or with the skate or mountainboard . Think of the fun of being able to use a small maneuverable wing in some space just a few steps from home. A park, a yard ... just a bit of space (much less than what is needed to fly a traction kite) and a bit of wind and the fun is guaranteed even away from the water.
Then of course there is the snow chapter , and there we are convinced that this winter we will see some good ones ... stay tuned .

If at this point you are even more curious and no longer want to wait, take a look in our shop for the wing models already available!

What it is and how it works

The Wing (also called kitewing or Wingfoil) is a wing halfway between a Windsurf sail and a hang glider sail. There are many variations and in reality it is not an absolute novelty in recent months, indeed wings of this kind have already been widely used on snow, on ice, on the road with skates or with