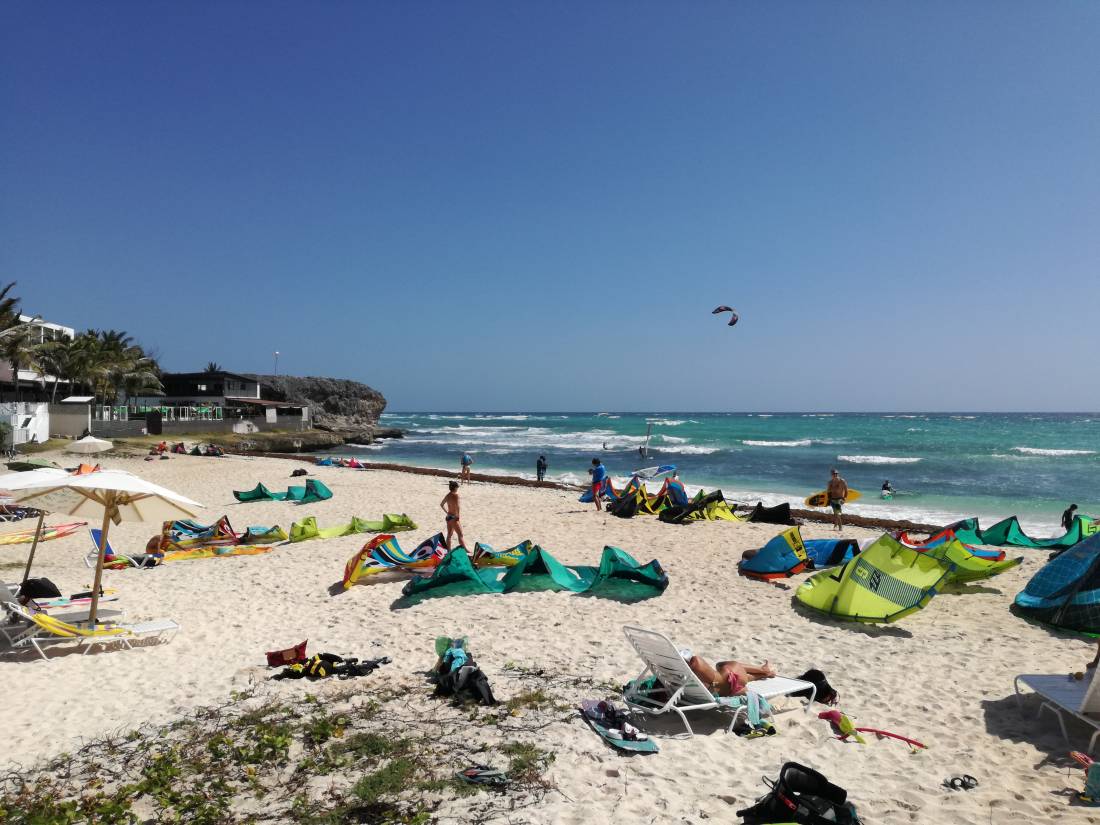 The beach of Silver Rock is a beach of white and thin sand, quite wide and surrounded by greenery and overlooked by some hotels and schools. The tip to the north of the beach is rocky, while downwind, just a few steps away and within walking distance is the Silver Sand beach.

The Silver Rock spot is well exposed to the trade winds that typically blow from the east, north-east and then side, side-off. The winter months are those during which the wind is stronger and blows with an intensity that is generally between 15 and 25 knots. In summer, on the other hand, the wind tends to be lighter and arrive more from the south east, but it is not excluded that it can give good conditions for kitesurfing, especially in July.

When the wind blows more from the ground it is very prickly. In this case, try to raise the kite as close as possible to the shore, always keeping the sail towards the water and run towards the sea quickly. After the first hundred meters in general, the wind stretches and it happens that outside it is beautiful, strong and tense, even if on the shore a leaf does not move.

At sea, at a distance varying between two hundred and four hundred meters from the shore, the reef unwinds on which the waves rise. Inside the reef flat water or a little chop ideal for freestylers and beginners, on the reef the waves that made this spot so famous. Beautiful lefts with a variable height between 1 and 3 meters, smoothed by the slightly side off sell ... practically a paradise for all  Goofy !

Despite the presence of the reef and despite the fact that the waves can also be impressive, Silver Rock remains a safe spot, where even waveriding beginners can become familiar and practice. This is because even at low tide there is always enough water above the reef, and even in the event of a refraction in the waves there is no risk. Moreover, the very presence of the reef guarantees the regularity and predictability of the waves, so those who don't feel like surfing will have no trouble avoiding them!

Along the reef there are various peaks that offer the best conditions depending on the tide. A good peak with often higher and faster waves is upwind of the Silver Rock beach, while in front of Silver Sand generally the longest waves are formed. Downwind, however, the wind is often very punctured and gusty and it is necessary to be very careful not to fall too far down because in the event of a sudden drop the last useful beach to return is the rescue beach ... after all they are rocks and reefs up to the freight bay, but it's a nice swim over there!

Tips for your kitetrip in Barbados:

The best hours to enjoy the most tense wind and especially the least crowding in the water are almost always those of the morning. Thanks to the time zone, you won't have any problems getting up early, so take advantage of it and try to make the first edges around 7am. Even the sunset is another top moment ...
Beware of precedence in the most crowded moments and to windsurfing (there are no separate areas for windsurfing and kitesurfing).

In Barbados there are some kitesurfing and hiring schools, including one right on the spot. However, try to bring everything you need and in particular at least one kit to repair the sails and the boards. Repairs made by locals are generally quite rough and very expensive, so if you can do it yourself it is often better.

To whom I recommend it

Barbados is an ideal destination for all wave lovers, whether they are kitesurfing or surfing, or a paddle. Everyone will be able to find waves suited to their level, their style and above all their sport.
In all honesty, I would not recommend Barbados to kitesurf beginners or those who would like to take their beginner course here. Not that it is impossible for a beginner to learn or go out here, I simply believe there are more suitable Caribbean islands. Then if your choice falls on Barbados anyway, I doubt that anyone could still regret a holiday here: the heat, the crystal-clear water and the relaxed atmosphere alone are worth the holiday!
Why not recommend it to a beginner: the Silver Rock beach is not very large and often sub-wind the wind is weak or gusty so practicing sailing on the ground is not easy. Whoever is at the first edges has the sea available up to the reef which is practically a lagoon, however this space is not very wide and if you drift a lot you can end up on the rocks or in small beaches from which to re-enter you have to work a little climbing along the coast on small rocky paths.

For all those who love kitesurfing, this is the right destination , a must try at least once. Beautiful lefts that unroll as far as the eye can see on the reef, but always with enough water on it so as not to be a dangerous spot.

The months that correspond to our winter are typically the best months for a kite trip to Barbados, then from December to March. This does not mean that it is useless to come here at other times of the year. Even the summer and the month of July in particular usually offer good conditions for kitesurfing, as well as spring. Except that according to statistics, December, January and February are the TOP months.

The Silver Rock area is not one of the most beautiful on the island. There are some not bad accommodations directly on the spot or within walking distance, but you will be practically in nothingness ... no walking in the evening or anything else. The area of ??You will still be close enough to the spot (5 minutes by car) but also to many surf spots, beautiful beaches, fish market etc.

Absolutely essential for exploring the island, especially with surf and kite equipment in tow. Keep in mind that cars are expensive and in short supply so it is good to book them in time. Hiring from local people saves, but okkio to the insurance because usually the local cars do not have it. The Italian license must be converted, an operation that can be done directly from the car rental or from a local office at a cost of around 10 Dollars BBD.

And if there is no wind?

In Barbados the possibilities for other sports besides kitesurfing are not lacking. The surf first of all. In Barbados it is possible to find waves for everyone, whether you have never tried before, whether you are a professional. There are tablet waves, longboard waves, waves from Stand up paddle ... you will be spoiled for choice.
In addition to surfing, snorkeling is also widespread thanks to the possibility of swimming with turtles or exploring submerged wrecks.
Out of the water then you can explore the island and of course its famous rum distilleries!

Here is a short video filmed in January 2019, during our last kitetrip in Barbados, which shows the Silver Rock spot: the road to the spot, the beach and of course some nice waves. I suggest you take a look at this video to get an idea of ??

Barbados, travel in the mecca of surfing and kites

Our surf and kitesurf trip in January 2019

Barbados is a Caribbean island that certainly needs no introduction, especially among surf and kitesurf enthusiasts. Always a privileged destination for surftrips and kitetrips, thanks to its ideal conditions, also due to its position which makes it one of the Caribbean islands most exposed to winds

Impact Vests aren't just for beginners. I know many feel cooler to go out without, hard and pure. We are the first to often have the bad habit of kitesurfing without the impact jacket, but this is as we

The Naish Boxer is the one strut kite dedicated to freeride - foiling and light wind by Naish kiteboarding. In these days of light sirocco and spring mistral we had the opportunity to use it and here are