Where to surf in Barbados

Barbados is the one that receives the most frequent and consistent swells throughout the year, thanks to its well exposed position. Every month of the year is good for a surf trip in Barbados, although the period in which the swells are statistically higher is between November and March, while in the summer it is more likely to find smaller swell but also glassy.

It is hard to believe how many spots are on such a small island and the most incredible thing is that there are really something for everyone: from the steep and tubing world class Bathsheba waves, to the soft and very long waves of freight. All in a few kilometers away. In almost three weeks we were unable to surf all, despite having surfed every day, often with more than one session a day and despite having had truly varied conditions available. In particular we have not surfed in the most northern spots. This is the case with Duppies and Maycocks. Both are quite difficult to reach and locate, as well as far from our base, which is why we have always stopped in commercials closer to us.
The other big problem was that they are rather isolated spots without a comfortable beach where to stop, so you understand that with a small child we always ended up preferring other types of spots. 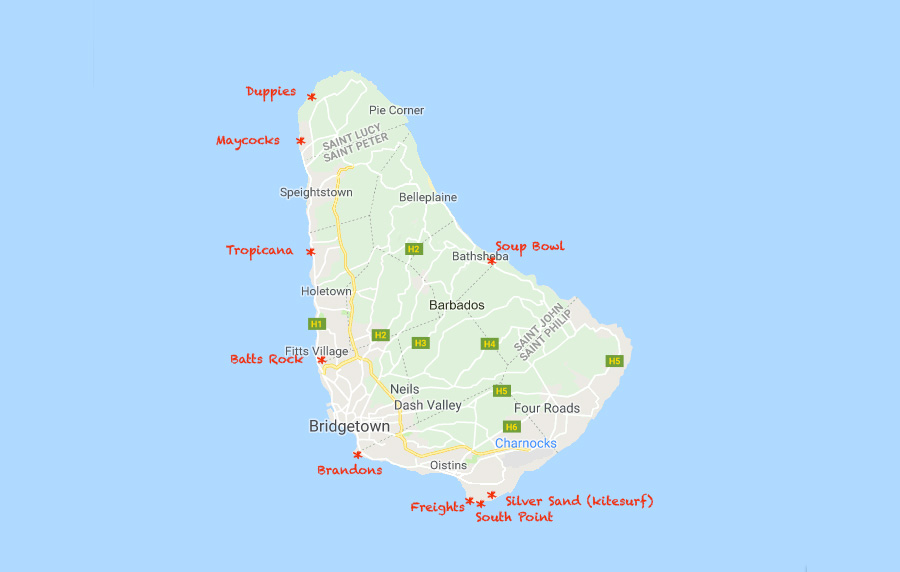 Here is the map of the surf spots that we surfed in Barbados, with some advice to organize yourself during the next vacation in this small island - playground! 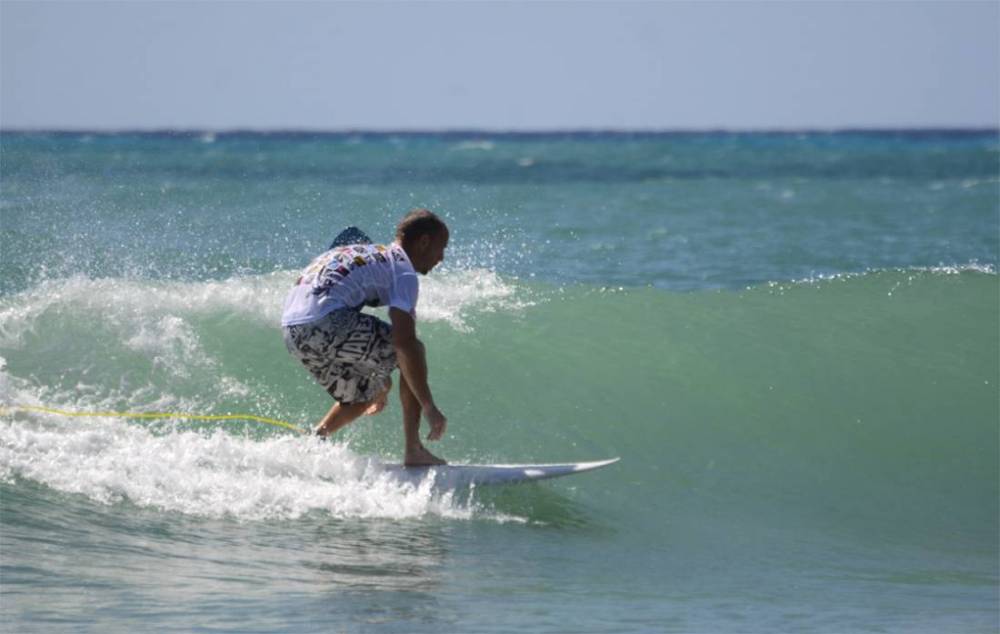 In the southern tip of the island, between Silver Sand and Oistinsis, fairly sheltered from the sale there is this beautiful long left wave that breaks on a mixed sand and reef bottom and almost always works in the winter months. Reading around is often described as tubing and beautiful high, but during our vacation we always found it with a height between the waist and the head and not too steep.
There is no beach so pay attention to sea urchins and corals to enter and exit the water. You can enter from the ladders that descend directly into the water from the concrete platform, when the sea is small, or from the rocks, trying to identify the point where there is a small beach. During our vacation this wave has almost always worked, alternating longboard conditions with tablet days.

Dangers: no major hazards, but beware of entering and leaving the water. Can be crowded.

When: South Point is one of the most consistent waves on the entire south coast, and beyond. It is generally the first that the local control to see if it works or not. The trade wind that blows from the north-east for most of the winter months here is offshore and the point offers a certain shelter even on the windiest days. Especially when the east coast is a washing machine there is hope here.
It works best with EAST swell and North East wind.
Medium or high tide. 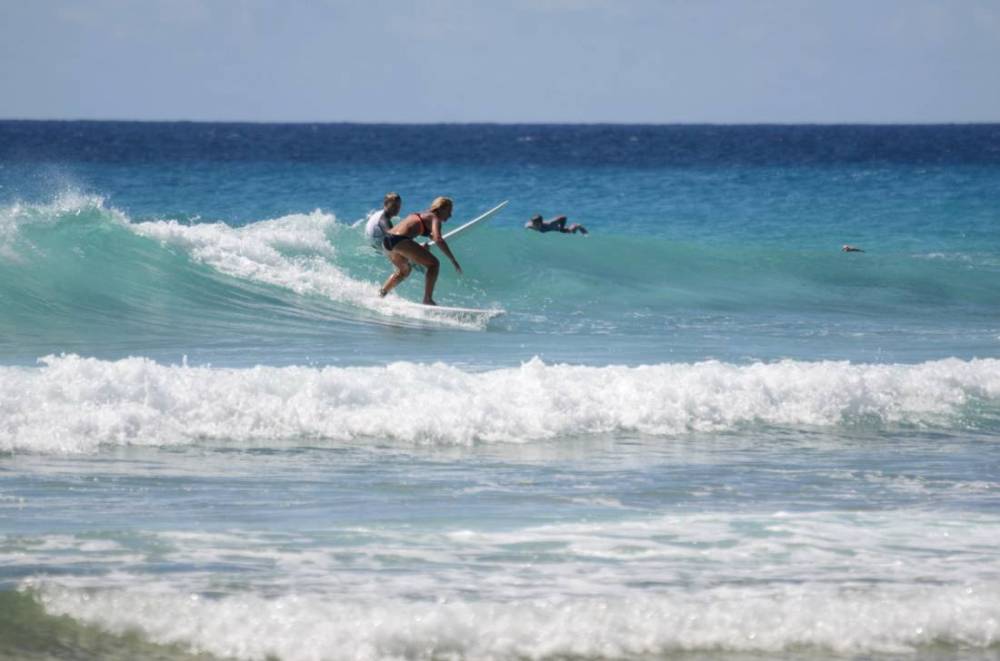 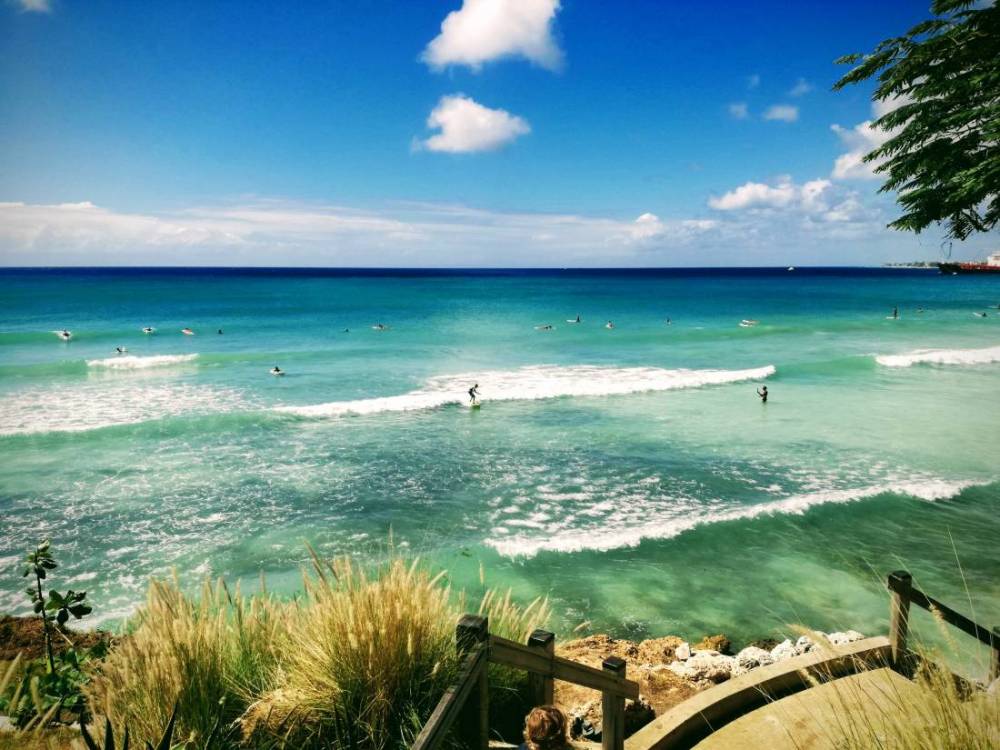 Still on the south coast of the island, moving from Silver Sand towards Oistinsis, after South Point lies Freights. The spot looks very good from the street, which is why it can be a bit crowded. The long and soft freight left is the dream of longboarders and beginners. Small crystalline waves that generally have a height between the knee and the shoulders, although occasionally they can give some swell to the height of the head. The seabed is of mixed sand and it is an absolutely safe spot: no curls, no sharp reef and lots of space for everyone ... here your only concern will be to spread sunscreen before entering the water. Plus it's normal to surf with turtles and you can spend time watching them swim in the crystal clear water between a set and the

Level: from beginner to grips with the first foams to experienced surfers looking for a relaxing ride.

When: Generally if you work South Point also works Freight. Sheltered from the wind blowing from the north east.
It works best with swell from East - South-East and wind from East North East.
It works with all tides. 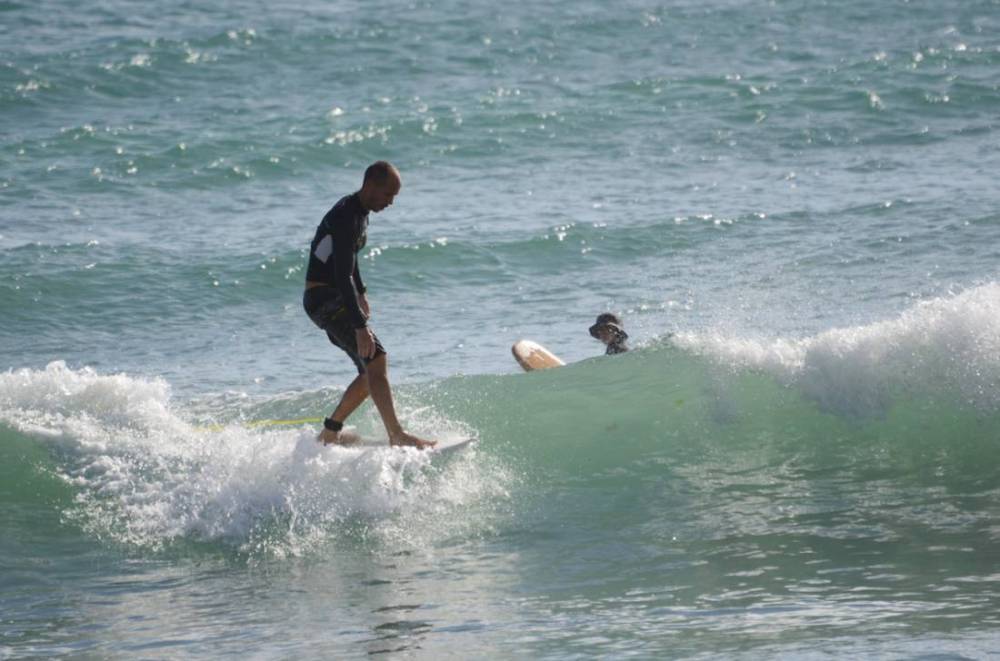 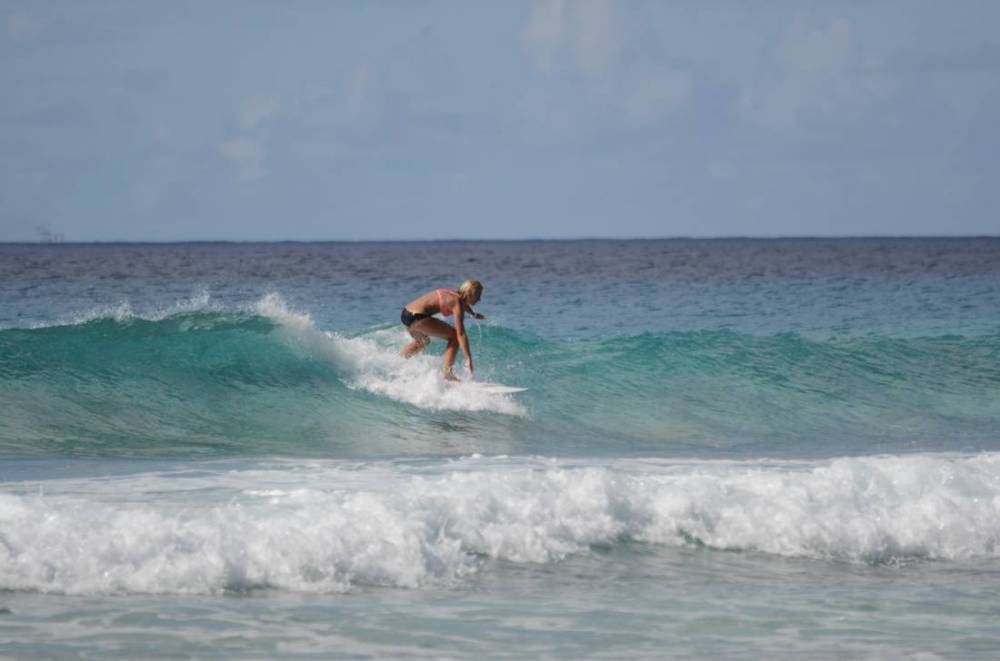 Proceeding north on the west coast, just before Bridgetown, we meet Brandons, one of the spots that has remained in our hearts and where we stopped off for the last few days. A long enough left that can also be well above the head. Be careful because google maps point to Brandons further north, at a beach near the port of Bridgetown. To reach the spot, follow the signs to the Coconut Beach Hotel instead. Park in the shade of palm trees just a few steps from the white beach. The seabed is of mixed reef reef, but not very sharp. But there are hedgehogs, so it is advisable to get in and out of the sand tongue at the bottom of the beach. On holidays and in the afternoon the peak can be crowded.

Dangers: Beware of hedgehogs when entering and leaving the water. Okkio at low tide because there is little water on the peak. Can be crowded.

When: If it is too windy it can be too choppy ...
Work better with swell from South Surd-East.
Medium or high tide.

Continuing to climb towards the north of meets the Batts Rock spot. This spot is well exposed to storm surges from the North and is one of those that works more with swell from this direction. A peak with a right and left rock and reef in a truly postcard setting. Generally the wave is not very long but it is fun. In any case it deserves a visit and a bath.

Dangers: no significant danger, but watch the seabed at low tide. It can be very crowded, also because the peak is only one.

When: If the swell runs from the north Batt Rock is the first spot that starts working and the last one stops.
Works with swell from West to North.
Medium or high tide. 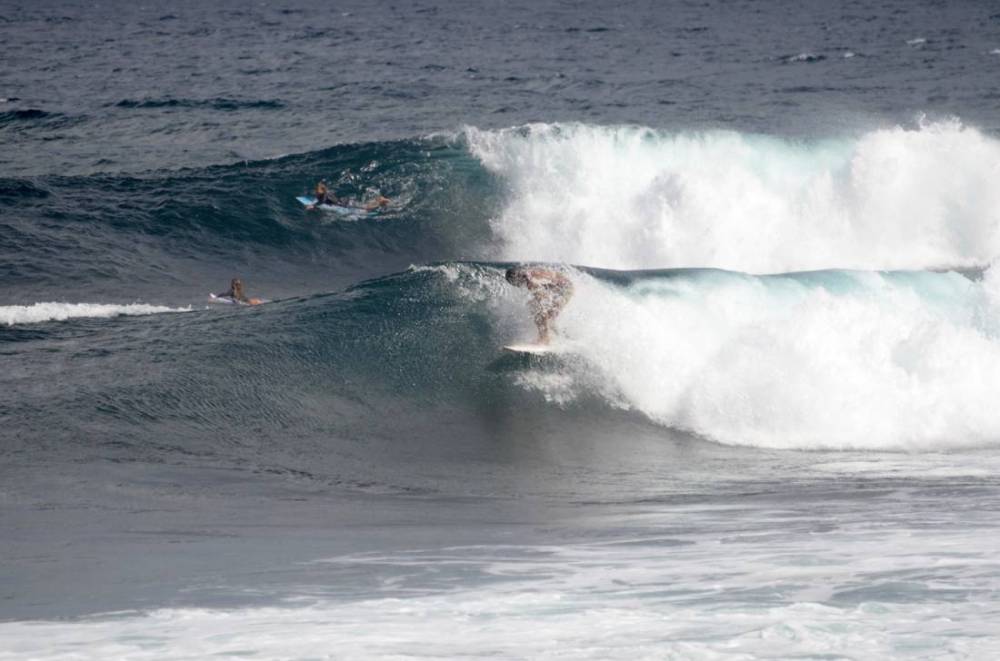 Soup Bowl is the World class wave of the east coast of Barbados that does not need many presentations: ranked by Kelly Slater in third place among the best waves on the planet, it is the site of numerous competitions and frequented by high-level surfers. On days when the swell enters as it should be, this right tubing can be up to 15 feet tall. Needless to say, it's not a beginner's spot!
During our vacation he gave some quieter days but also some really impressive days during which there was always a nice group of kids who gave a show like in a contest.

Level: from advanced to expert. Attention: it is a wave that can be really powerful.

When: Swell from the north and south or south west wind. With a north-east wind it is a washing machine.
Marea: media

If you're in Barbados, check out the soupbowl webcam here before you go on the road .

On the North West coast of Barbados there is this other challenging and quality wave: Duppies. Not so easy to find or reach. The road at some point becomes a dirt road and you have to walk for about 10 minutes. Tiny beach that practically disappears at high tide. The peak is rather far from the shore and on leaving it is important to pay attention to the currents that are always very strong here and shoot you out.
The peak is located near the discharges of a chicken farm and it is said that for this reason it is very frequented by sharks that rush to be called by the blood ... the locals, however, ensure that it is not.

Level: from advanced to expert. Attention: it is a wave that can be really powerful.

When: Swell from the north and south or south west wind. With a north-east wind it is a washing machine.
Marea: media

Barbados, travel in the mecca of surfing and kites

Our surf and kitesurf trip in January 2019

Barbados is a Caribbean island that certainly needs no introduction, especially among surf and kitesurf enthusiasts. Always a privileged destination for surftrips and kitetrips, thanks to its ideal conditions, also due to its position which makes it one of the Caribbean islands most exposed to winds